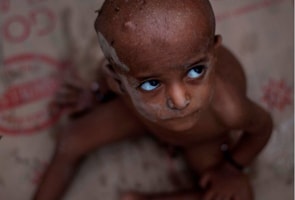 United Nations: India has contributed to a large reduction in global poverty, according to the UN annual report on the Millennium Development Goals, which also pointed out that despite progress, the most vulnerable sections of society were being left out.

The report, which was released yesterday, said that poverty continues to decline in many countries and regions.

It said that the fastest and sharpest reductions in poverty were in Eastern Asia particularly in China where the poverty rate is expected to fall under 5 per cent by 2015.

"India has also contributed to the large reduction in global poverty," the report said.

The report said that in China and India combined, the number of people living in extreme poverty between 1990 and 2005 declined by about 455 million, and an additional 320 million people are expected to join their ranks by 2015.

The report examines where the world stands in terms of achieving the eight social and economic targets by 2015.

The report also said that despite significant setbacks after the 2008-2009 economic crisis, the world is still on track to reach the poverty-reduction target.

By 2015, it is now expected that the global poverty rate will fall below 15 per cent, well under the 23 per cent target.

The report pointed out that despite progress, the most vulnerable sections of society were being left out.

For instance, the poorest children have made the least progress towards improved nutrition.

On the health front, it said that the prevalence of tuberculosis was declining.

Between 1995 and 2009, a total of 41 million tuberculosis patients were successfully treated and up to 6 million lives were saved due to effective international protocols for the treatment of tuberculosis.

However, India had one of the highest number of tuberculosis cases along with China, South Africa, Nigeria and Indonesia. China and India combined accounted for 35 per cent of the world's new tuberculosis cases.

Promoted
Listen to the latest songs, only on JioSaavn.com
In environmental sustainability, the report said that forests are rapidly disappearing in South America while Asia led by China is experiencing net gains, the report said.

Asia had registered a net gain of 2.2 million hectares annually in the past 10 years, mostly because of large afforestation programme in China, India and Vietnam.
Comments
UN poverty reportPovertyIndia povertyMillennium Development Goals