India-China Standoff: Companies from nations that share a land border with India are barred from bidding for government contracts for goods and services until they register with the industry department, according to an official statement. India-China Standoff: India imported goods worth over $70 billion from China in 2019.

India slapped new trade curbs on some of its neighbors, in a move primarily seen aimed at keeping Chinese businesses out after a border conflict and worsening economic ties between the two nations.

Companies from nations that share a land border with India are barred from bidding for government contracts for goods and services until they register with the industry department, according to an official statement. Previously, New Delhi had made it mandatory for suppliers to mention the country of origin on the government's e-Marketplace while bidding for tenders. 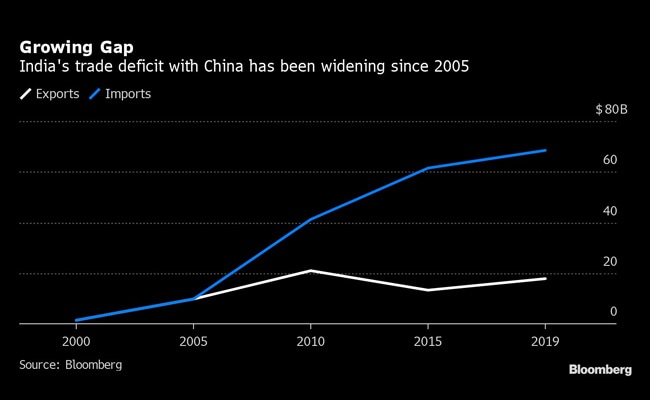 The measure is the latest in a series of steps taken by Prime Minister Narendra Modi's government to wean India away from reliance on China -- New Delhi's biggest source of imports. Earlier, the administration banned the use of 59 Chinese apps, while goods purchased from China were delayed at Indian ports after a deadly conflict between the neighbors along a disputed Himalayan border left several soldiers dead on both sides.

India's move to firewall key sectors from Chinese presence signals that the south Asian nation is willing to bear costs in the short run in order to reduce exposure of critical sectors, said Harsh Pant, a professor of international relations at King's College London. "Such moves are a calculated response to shape Chinese calculus on the border issue which is getting serious by the day in the absence of any commitment by the Chinese to resolve it amicably."

The development comes at a time when both the nations are engaged in talks to defuse a border stand off. India on Thursday said it expects the Chinese side to be sincere in completing the disengagement of troops along the Line of Actual Control.

A spokesman of the foreign ministry did not immediately respond to a text message whether recent curbs are aimed at China while a spokesperson of the prime minister's office was not immediately reachable over phone during office hours.

Other key points from the latest move:

The step of further tightening of rules for bidding process was taken as border disengagement and de-escalation are not moving in a positive direction, said Pant. "Tensions with China are already high with growing consensus in India that the Chinese Communist Party seems in no mood to diplomatically resolve the border crisis."

India imported goods worth over $70 billion from China in 2019 while the bilateral trade deficit stood at about $50 billion, much higher than with any other trading partner.