In Bypolls Today, These Are The Key Battles To Watch Out For

The votes will be counted on Tuesday and all eyes will be on key battles in Bihar, Bengal, Madhya Pradesh, Rajasthan and Telangana.

The Election Commission had announced the date for by-elections last month.

As three Lok Sabha and 30 assembly constituencies vote in by-elections on Saturday, the polls will draw up crucial tests for several leaders and some state Chief Ministers even though they aren't expected to have any major bearing on the stability of governments.

Dadra and Nagar Haveli, Mandi in Himachal Pradesh, and Khandwa in Madhya Pradesh are the parliamentary constituencies while the assembly seats are spread across 14 states.

Five of the assembly seats are in Assam, four are in West Bengal, three each in Madhya Pradesh, Himachal Pradesh, and Meghalaya, two each are in Bihar, Karnataka, and Rajasthan, and one each in Andhra Pradesh, Haryana, Maharashtra, Mizoram, Nagaland, and Telangana. 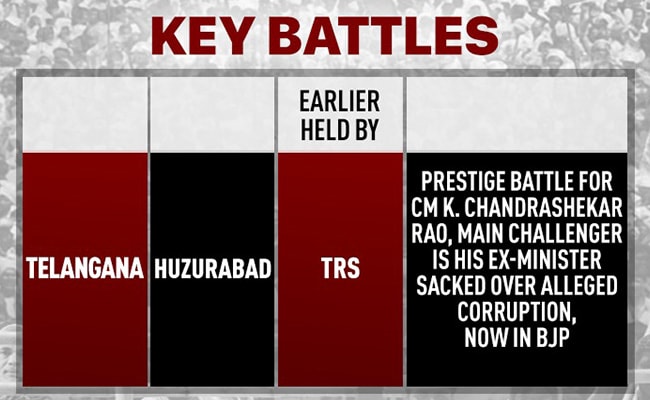 The votes will be counted on Tuesday and all eyes will be on key battles in Bihar, Bengal, Madhya Pradesh, Rajasthan and Telangana.

The BJP has been changing Chief Ministers in several states which puts the likes of Madhya Pradesh Chief Minister Shivraj Singh Chauhan in a spot. With a delicate hold on power, he would want to bolster his position in the party and much of it depends on the outcome of the polls. Key battles in the state include those for Raigaon, Prithvipur and Jobat. While the BJP holds the first one, the other two are held by the Congress.

In Rajasthan, Chief Minister Ashok Gehlot has a similarly slim majority and faces infighting in the Congress with party leader Sachin Pilot at the helm of a camp of detractors. Vallabhnagar and Dhariawad, held by the Congress and the BJP respectively will be the seats to watch on the day of results. 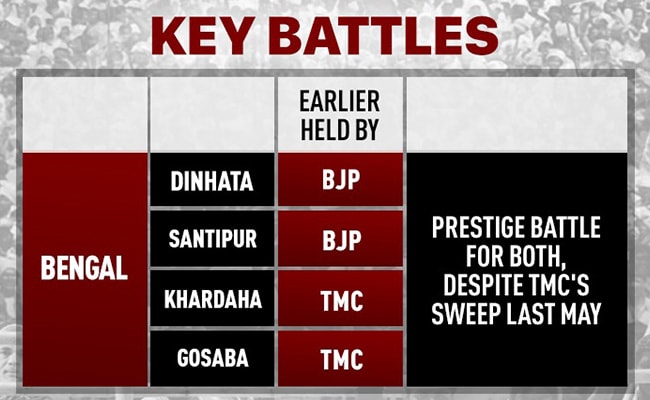 In West Bengal, all four seats - Dinhata, Santipur, Khardaha and Gosaba - will be prestige battles for the ruling Trinamool and the opposition BJP despite Chief Minister Mamata Banerjee's decisive sweep in May.

The by-election in Telangana's Huzurabad has also become somewhat of a prestige battle for Chief Minister K Chandrasekhar Rao with the polls necessitated following the resignation of Eatala Rajender in June following his removal from the state cabinet over allegations of land grabbing. Mr Rajender, who rubbished the allegations, had quit TRS and joined BJP.

The two seats voting in Bihar - Tarpur and Kusheshwar Asthan - are also seen as an important test for Chief Minister Nitish Kumar, whose party Janata Dal (United) - already the smaller party in the ruling alliance - must retain both. 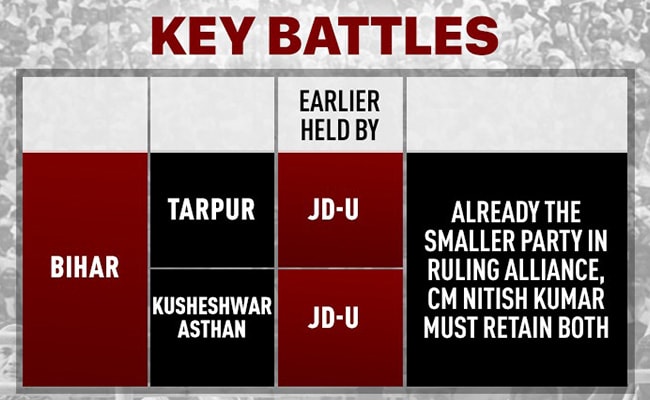 Back in Bihar after three years, Rashtriya Janata Dal chief Lalu Prasad Yadav is already shaking things up in the state. Mr Prasad has said he missed two state elections due to illness and detention but will now ensure "visarjan" (departure) of Chief Minister Nitish Kumar and the ruling National Democratic Alliance (NDA) in the state.

In Haryana, senior Bharatiya Kisan Union (BKU) leader Rakesh Tikait has hinted at farmers supporting Indian National Lok Dal (INLD) candidate Abhay Singh Chautala. This is the first election after the farmers' protest started and Mr Chautala's support for the protest is bound to affect the poll outcome. A grandson of former deputy prime minister Chaudhary Devi Lal and son of former Chief Minister of Haryana Om Prakash Chautala, Abhay Chautala had resigned from the state assembly in support of agitating farmers in January. He is now contesting again from the Ellenabad seat which fell vacant after his resignation. 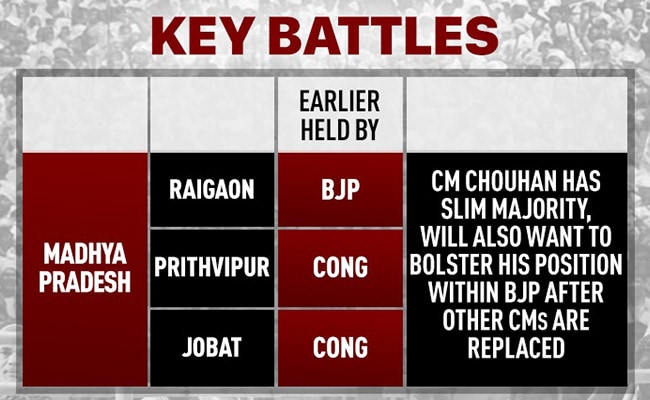 Usually, the party in power in a state are favourites to win. However, it may also be an opportunity for the ruling BJP to sense the mood of the electorate ahead of the next round of state elections. Though sympathy for those seats where the elected representatives have died will play a big role, it might also reveal how the public perceived the incumbent party's handling of relief work during the pandemic.

Madhya Pradesh, with one Lok Sabha and three Vidhan Sabha, will see a total of 55 candidates fighting it out over the four seats. The opposition is attacking the Shivraj Singh Chouhan-led government over corruption, fuel price hike, food inflation, and allegedly lousy pandemic response. Mr Chouhan desperately needs a win after an embarrassing loss in the Damoh byelection earlier this year where both the Chief Minister and former Congress leader Jyotiraditya Scindia had campaigned for the candidate. However, 27 sitting Congress MLAs have joined the ruling party in the state since the Kamal Nath-led government fell following resignations by 22 of its MLAs in March 2020. The Congress will also go all-in to salvage the party in the state.

In Bihar, there's much friction in the grand alliance with Mr Yadav publicly calling long-time ally Congress a deadweight. Both the RJD and the Congress are contesting the assembly by-elections to two seats - Tarapur (Munger) and Kusheshwar Asthan (Darbhanga) - on Saturday. Janata Dal (United), which won both the seats in the last assembly elections, has reasons for concern as the NDA enjoys a slim majority in the state assembly. Losing both seats can give wiggle room to the RJD to negotiate with minority parties supporting the state government. 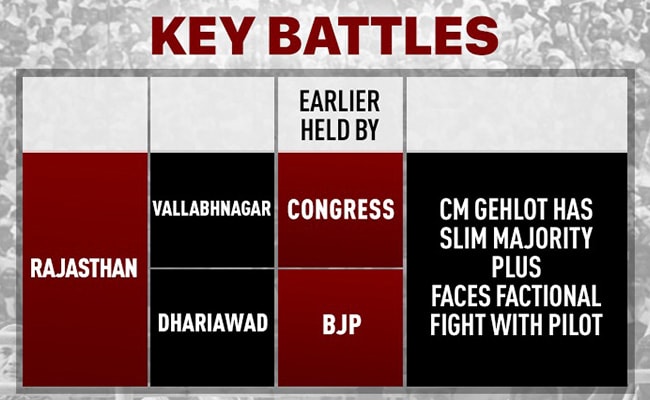 Notably, the JDU, harbouring ambitions of becoming a national party, has recently put BJP, its biggest ally in the state, in a spot after demanding a probe into the Pegasus case and echoing rival RJD's demand for a caste census.

Both of Karnataka's assembly seats, Hanagal and Sindgi, are in Lingayat dominated North Karnataka. Lingayats are the single largest community in the state and are mostly concentrated in the northern region. The elections are crucial for the BJP as Hanagal falls in the home district of Lingayat leader Basavaraj Bommai, who replaced BS Yediyurappa as Chief Minister of the state in July. Yediyurappa is considered the tallest Lingayat leader in the state and has been campaigning along with Mr Bommai in the two seats.

In Assam, the BJP is aiming to sweep the three out of five seats it's contesting which will take them closer to a simple majority. With 59 seats, BJP is five short to a majority in the state and is dependent on the Asom Gana Parishad (AGP) and the United People's Party Liberal (UPPL). The opposition parties Congress and Badruddin Ajmal-led All India United Democratic Front (AIUDF), who contested the assembly elections in the state together, have broken up their alliance and will contest separately.