Somnath Chatterjee Funeral: His body was taken to three locations - the Calcutta High Court, the West Bengal Assembly and his south Kolkata home. 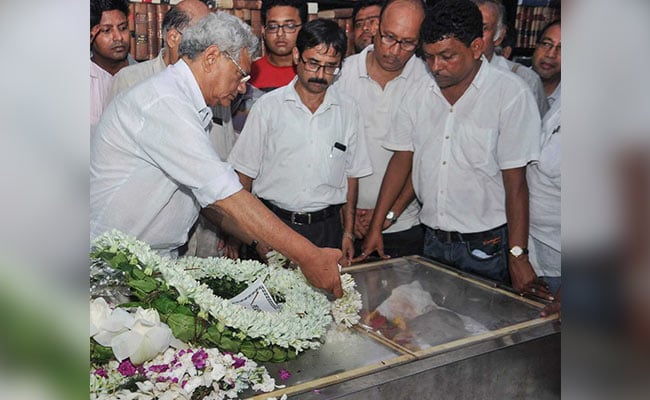 The CPM wanted to drape Somnath Chatterjee's body in the red flag. (PTI)

The death of Somnath Chatterjee on Monday and the day-long events that followed have opened up a Pandora's Box the former Lok Sabha Speaker would most likely have frowned down upon. As his body was taken to three locations in Kolkata that mattered to him - the Calcutta High Court, the West Bengal Assembly and his south Kolkata home - members of the CPM tried to play an active role in organising the funeral march.

The 89-year-old was expelled by the CPM despite representing the political party in Lok Sabha for almost 40 years.

A sour note was struck at the Assembly where Mr Chatterjee's body lay in state when his daughter responded with some hostility.

Asked if her family would accede to the CPM's request to take his body to the party office at Alimuddin Street in central Kolkata for the last respects, Anushila Bose said "no and no" with great emphasis.

She said her mother and her brother had refused to let either Somnath Chatterjee's body be taken to Alimuddin Street where the headquarters of West Bengal unit of the CPM is situated. Or allow the party to drape his body in their red flag. "We had seen how badly he was hurt when he was expelled from the party. I remember tears rolling down his face that day. So, no. No need to take him the CPM office," said Anushila Bose.

A roomfull of stunned people waited for CPM General Secretary Sitaram Yechury to finish laying the wreathes on the body and left hurriedly.

Biman Bose told reporters outside, "I don't mind his behaviour. He is completely broken by the loss of his father."

Mr Yechury played down the snub saying,  "This is a tragedy, not a time to get in right now. At times emotions will be frayed. Here is the time we are noting the achievements he made..."

The CPM leaders were clearly having a bad day. Because after Mr Bose left the house, Pratap Chatterjee continued his outburst, naming several top CPM leaders. "I have no problems with party workers who made my father what he is. But people like Biman bose and others only used him," he said.

The incident has angered CPM workers who stayed with the body till the end and marched with the hearse all the way to Kolkata's SSKM hospital.

In the middle of this bitter drama, another controversy - this one within the CPM - unfolded. The CPM issued a condolence message in which they did not use the term Comrade before Somnath Chatterjee's name. The official message did not have any reference to his association with the party either.

Most supporters of the Left party in Bengal see the difference between the central and state unit as unfortunate soon after the death of a man who was so closely associated with the party.