PM Modi in Raebareli said that his government implemented MS Swaminathan's recommendations and this one decision has ensured that farmers will get Rs 60,000 crore 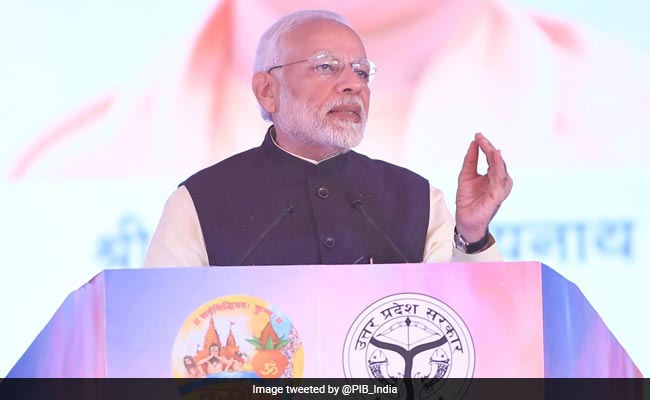 PM Modi in Raebareli said that only about 1,000 farmers got loan waivers in Karnataka since May.

In his first rally since losing three big states to Congress and two others to regional parties in the recently held assembly elections, Prime Minister Narendra Modi virtually launched the BJP's campaign for the next year's national elections in Uttar Pradesh's Raebareli, the home turf of Sonia Gandhi.

From the Congress' noisy campaign designed around the Rafale fighter jet deal to target the prime minister to blaming the previous government at the centre for farmers' distress, PM Modi went all out in his attack on the main opposition party.

Crediting his government for an increase in farmers' income, PM Modi said that in the country's 70-year-old history, farmers have only suffered. But his government is doing everything to ensure a rise in their incomes, he said.

"Only BJP understood farmers and agriculture issues. We implemented MS Swaminathan's recommendations. This one decision has ensured that farmers will get Rs 60,000 crore. The MSP has been increased. Did the report (Swaminathan commission) not exist during the UPA rule? Why didn't they implement it?" asked PM Modi in Raebareli.

The National Policy for Farmers was prepared by agriculture scientist MS Swaminathan, who was the chairman of the National Commission on Farmers during 2004-09 when the UPA was in power. Its primary goal was to increase the net income of farmers and ensure a better minimum support price (MSP) for their produce.

PM Modi's remarks came days after the BJP lost Madhya Pradesh, Chhattisgarh and Rajasthan to the Congress which has promised to waive loans of farmers in all three states within 10 days of forming the governments. The new chief ministers will take oath on Monday, which is when the countdown to fulfill their prime poll promise, the farm loan waiver, will begin.

Referring to media reports on loan waiver for farmers in Karnataka, where the Congress formed the government in alliance with HD Deve Gowda's JDS in May, PM Modi said "they had also promised farm loan waivers in 10 days in Karnataka, but six months later, the truth is entirely different".

Calling the Congress' loan waiver scheme a big "lie", PM Modi said, "Not even 1,000 farmers got loan waivers in Karnataka, several newspapers have reported. In fact, action is being taken against farmers and arrest warrants have been issued against them."

In 2008, the Congress had promised loan waivers, he said. "Farmers had a loan of Rs 6 lakh crore, but the UPA government waived only Rs 60,000 crore. At least 35 lakh people who didn't even deserve loan waiver, walked away with benefits and farmers continued to suffer," PM Modi alleged.

PM Modi also claimed that during the UPA regime, farmers were paying huge premiums -- up to 15 per cent -- for crop insurance, but now they pay "not more than 1.5 per cent to 5 per cent".

"In the last two years, the farmers have paid Rs 8,000 crore as premium and got Rs 33,000 crore back after their crops were destroyed. So we returned four times the money that they paid," the prime minister said.