Atal Bihari Vajpayee, a three-time prime minister, died on Thursday of a long illness. The 93-year-old had spent the last decade away from politics, largely confined to his home, a bungalow in the heart of Delhi. 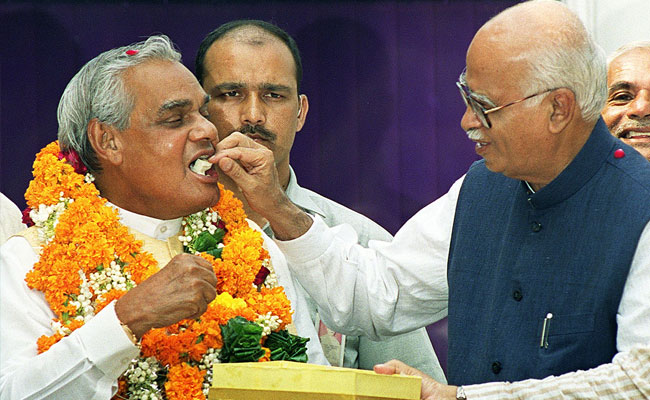 "I have spoken at many gatherings in life, I never thought I'd be speaking at a gathering like this, where Atal ji is not present," said Mr Advani.

Atal Bihari Vajpayee, a three-time prime minister, died on Thursday of a long illness. The 93-year-old had spent the last decade away from politics, largely confined to his home, a bungalow in the heart of Delhi.

Mr Advani, who served as Mr Vajpayee's deputy, recalled that he would ponder about how long he would be alive. "It was painful when he spoke like that," said the veteran.

"The PM highlighted Atal ji's qualities, many others can do the same, I consider myself lucky that I was his friend for 65 years. We used to watch films together, read books together," said Mr Advani.

He said one of Mr Vajpayee's specialties was his cooking. "He used to cook for others...Having stayed with him, I had a great experience of his cooking, even if it was just Khichdi."

Mr Advani stressed that it was important to live by Mr Vajpayee's values.

"Whatever he taught us, we should live by those values. Pray to god that I am able to walk the path shown by him, for life, that I am able to pass his values on to others, I need that strength from god," he said.

Mr Advani had put out an emotional statement after Mr Vajpayee's death.

"His captivating leadership qualities, mesmerising oratory, soaring patriotism and above all, his sterling humane qualities like compassion, humility and his remarkable ability to win over adversaries despite ideological differences have all had a profound effect on me in all my years in public life," said the 90-year-old BJP leader, adding, "I will miss Atalji immensely."