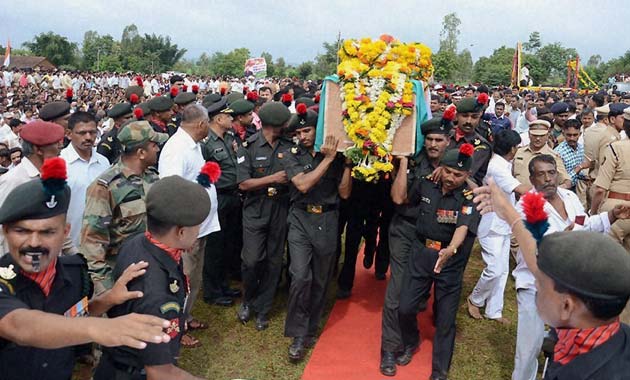 File photo: The funeral of one of the Indian soldiers killed at the LoC

New Delhi: India's Parliament has, in a resolution passed on Wednesday, sent a strong message to Pakistan deploring its "unprovoked attacks" at a time when peace efforts were being made. But the tone of greetings sent by Prime Minister Manmohan Singh to his Pakistani counterpart Nawaz Sharif yesterday seemed at contrast with that stern statement.

Sources said the PM said in his Independence Day greeting to the Pakistani PM that New Delhi is "committed to pursue peace and cooperation between India and Pakistan."

This message was not released to the media. It became known that the PM had sent the message only after Pakistan released Mr Sharif's Independence Day greetings for Dr Singh, thanking him for his message and hoping that the two leaders would meet in New York next month.

Pakistan celebrates its Independence Day on August 14, a day before India does.

External Affairs Minister Salman Kurshid said there was no contradiction between Parliament's resolution and the PM's greetings, which he described as a "protocol of government to government exchange." He also said, "This is no time to be talking about talks with Pakistan, leave alone a summit between the two PMs."

India's resolution, passed in the Lok Sabha and Rajya Sabha today, was in response to and strongly rejected a resolution passed by the Pakistan National Assembly yesterday, blaming India for aggression along the Line of Control or LoC. (Read: A tough resolution amid calls for restraint, talks)

The Indian resolution said, "This House rejects and deplores the resolution passed by the National Assembly of Pakistan on Aug 13, 2013, and the Provincial Assembly of Punjab which makes absolutely baseless and unfounded allegations against the Indian Army and the people of India."  It said the Pakistani Army had made unprovoked attacks on India. (Read full text of the resolution)

India also hit back at Islamabad's mention of Kashmir: "... the entire state of Jammu & Kashmir, including the territory forcibly and illegally occupied by Pakistan is an integral part of India, and will always remain so," the resolution said.

Pakistan's resolution had extended support to the "struggle of the Kashmiri people".

Islamabad continues to deny any "involvement" of its Army in the killing of five Indian soldiers at the LoC in Poonch, Jammu and Kashmir, on August 6 or that its Army has violated a ceasefire agreement. But in the last one week alone, Pakistani troops have violated ceasefire at the LOC eight times.
Comments
India-Pakistan talks