At JNU campus in Delhi, objectionable messages were found written on the pedestal of a yet to be unveiled statue of Swami Vivekananda. 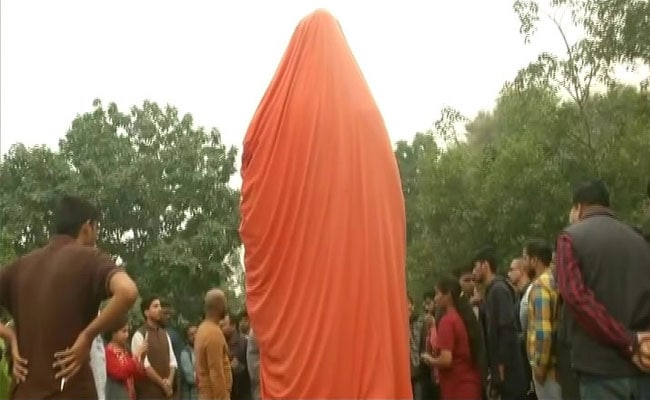 JNU student union denied any involvement in the incident related to Vivekananda statue.

Objectionable messages were found written on the pedestal of a yet to be unveiled statue of Swami Vivekananda on the Jawahar Lal Nehru University (JNU) campus  on Thursday.

There was no immediate reaction from the university's administration over the incident, which came to light after a video was widely shared on the internet.

The statue, which is covered in a saffron-coloured cloth, is located at the university's administrative block.

Representatives of the Jawaharlal Nehru University Students' Union (JNUSU) denied any involvement in the incident and said they will issue a statement soon.

On Wednesday, students had painted various messages for vice-chancellor Mamidala Jagadesh Kumar inside the administration block of the university as they barged inside the building to talk to him about the hostel fee hike.

By evening, the fee hike saw a partial rollback and JNU said the clauses in the Draft Hostel Manual pertaining to the dress code and curfew timings were also removed.

Hundreds of students, led by the JNUSU, had barged inside the administration block to talk to the VC and on not finding him and other officials in the building, painted messages on the walls near his office.

The university administration, after facing two weeks of protests, rolled back the hostel fee hike partially for students Below Poverty Line (BPL) not availing any scholarship. Students called the move an "eyewash".