Helped by an army of workers, the BJP is attempting to reach every corner of Gujarat and turn every uncertain voter. 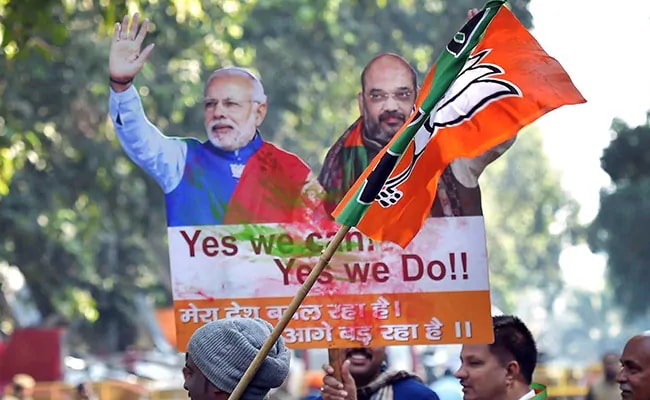 On a recent Friday morning, Dhansukh Patel -- volunteer, loyal foot soldier, and long-time member of Bharatiya Janata Party -- sat on the verandah of his home deep in discussion with aides on strategies to win more voters to the party.

As Gujarat holds state elections, Mr Patel is on a mission to ensure that most of the 1,400 people in his village of Umber vote for the BJP. Aided by a database with details about local voters collected over the years, his team of eleven people has been knocking on doors, sending WhatsApp messages, and helping families sign up for government welfare programs that provide them with free rice and medical assistance.

Gujarat is Prime Minister Narendra Modi's home turf. It's the state where he was Chief Minister for more than a decade and political analysts say a loss in the state is unlikely. Even so, the party machinery has been in overdrive for months. Helped by an army of workers like Mr Patel -- who are essentially helping it walk the last mile -- the party is attempting to reach every corner of the state and turn every uncertain voter.

Yet the election machinery that the BJP has shifted into gear goes well beyond the polls in Gujarat. PM Modi wants to expand his support base and sustain momentum for the national elections in 2024 when he is expected to again lead the party for a third consecutive term. It's a mammoth effort run by foot soldiers like Mr Patel, showing how the BJP morphed from a fringe group into the world's largest party with more than 180 million members, a number that's about double the reported membership of China's Communist Party.

Since retiring two years ago, Mr Patel, 60, says he's devoted all his time volunteering for the party. "Rallies are fine, but door-to-door campaign is most effective," he said, as he thumbed through pages of data listing local villagers and their contact information.

Polls in Gujarat close on Monday, and the results will be out on December 8. They will be an important indicator of PM Modi's popularity for the national elections. Along the way, the BJP supplements the work of people like Mr Patel with detailed surveys to prepare it for both state and national elections.

The interest in data extends to the highest levels of the BJP. Beyond its official survey, Amit Shah, Union Minister of Home Affairs and the party's master strategist, personally relies on professional teams to get on-the-ground information and cross-check details provided by party leaders, two people familiar with the matter said. Mr Shah usually focuses on identifying issues, calculating risk, preparing blueprints, and making social alliances, according to political analysts and party members.

The BJP's main opposition party, the Congress, doesn't have enough boots on the ground and has been struggling to reclaim lost ground after suffering its worst-ever defeat in the 2014 elections that brought PM Modi to power nationally.

The BJP's unapologetic emphasis on Hindu nationalism, creation of new social and caste coalitions, and focus on women and welfare programs made it the "primary pole of Indian politics, replacing the Congress", said Nalin Mehta, dean of the School of Modern Media at UPES University in Dehradun and the author of "The New BJP."

"All of these factors combine with a formidable grassroots cadre and a ruthless managerial focus on winnability to create a powerful election machine that can often make the difference in close contests," says Mr Mehta, a political scientist. "This increases the scale of the challenge for India's opposition parties as they gear up for the next general elections in 2024."

The BJP is also India's richest political party, with its income in the financial year 2021 topping the combined wealth of the next seven largest national parties, giving it a huge advantage over rivals.

Local leaders and candidates bear very limited expenses, with the central leadership taking care of most expenditures, including the cost of star campaigners and publicity, said Niranjan Zanzmera, head of the BJP in Surat city.

Gujarat will provide a template as the BJP starts programs, including training camps for workers, as part of its preparation for other state assembly elections including Karnataka, Rajasthan, Chhattisgarh, and Madhya Pradesh next year.

For the 2024 national elections, the BJP has also formulated action plans, with the aim of winning the 144 seats that didn't go to them in 2019, according to two senior leaders familiar with the development.

The party starts election preparations early. In Gujarat, it swung into action to win the state for the seventh consecutive term by replacing the incumbent chief minister in September 2021 with a new leader. It also lured a strong local leader from the Congress party in June to join the BJP in Gujarat.

Jagdish Parekh, the BJP unit chief in Surat district, said his team has been adding new members, forming committees at the village level, analyzing data on caste and religion, and setting up call centers for at least six months before the Gujarat elections.

Collating such information can help select candidates, focus on local groups, target messages for voters who are still on the fence, and build social alliances, he said.

"We do micro-management of elections," Mr Parekh said. "It's the human chain of dedicated workers that are ensuring BJP victory."

Still, opposition party leaders, including the Congress's Rahul Gandhi, say the BJP's emphasis on religion and Hindu nationalism, is a deeply divisive force in a secular nation.

Gujarat has its own history of religious turmoil. In 2002, soon after Narendra Modi became the Chief Minister of Gujarat, more than 1,000 people, mostly Muslims, were killed in the province in sectarian rioting. Human rights groups blamed PM Modi for doing little to stop the violence, allegations that were denied by him and later dismissed by the Supreme Court.

On social media, a key battleground in Indian elections -- more than 10,000 workers and 60,000 volunteers are working across Gujarat to create content and monitor opposition activities, said Manan Dani, social media co-convener for the state. While the party's social media cell is active through the year, three full-fledged war rooms have been set up for election campaigning in Gujarat, he said.

Despite its huge network, the BJP isn't invincible. It has suffered defeats in some states, including Delhi, partly because strong local leaders weren't available. It lacks a base in southern states though the party is trying to make inroads there.

Rama Chandra Khuntia, a senior leader of the opposition Congress party, said the BJP is spending heavily on political marketing, paid news, and advertisements, and Congress can't afford to spend as much.

Still, the Congress is gaining ground after a nationwide march led by Mr Gandhi, which began in early September, said Mr Khuntia. "We will be able to give a tough fight in the general elections."

The regional Aam Aadmi Party, which governs Punjab and Delhi, is a serious contender in Gujarat. It may not match the BJP in the number of last-mile party workers and financial resources, but can compete with its social media presence and dedicated volunteers, said Anup Sharma, a leader of the Aam Aadmi Party.

Even as the BJP makes a big push on the ground, PM Modi remains its brand ambassador and star campaigner, communicating directly with voters by addressing rallies. For the Gujarat election, he has addressed about 35 rallies since November, reaching out to farmers, youth, and women. By contrast, Mr Gandhi, scion of the Nehru-Gandhi family, has addressed only two public rallies in Gujarat.

Even so, the national elections are not a done deal for the BJP because it could face voter anger on rising prices and unemployment, said Arati Jerath, a New Delhi-based author and political analyst.

Yet the BJP has a head start as "a master in the art of communication through social media and good at using its resources in a very targeted manner," said Mr Jerath. "They know the art of election management."