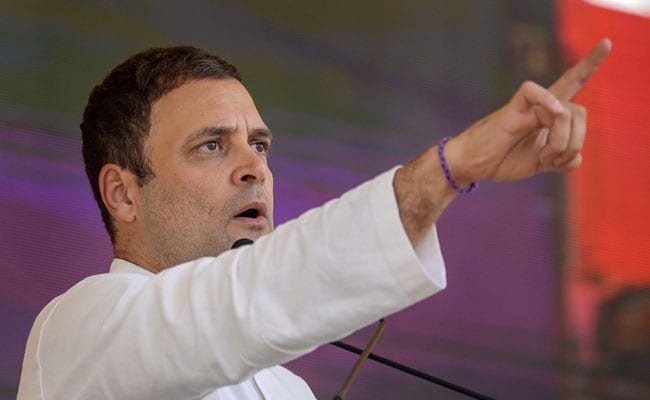 CBI chief Alok Verma was sent on leave because he was "collecting papers of the Rafale scam," Rahul Gandhi said today, ramping up his attack on Prime Minister Narendra Modi after an overnight mega shake-up in the country's top investigating agency.

The warring top two of the CBI, Alok Verma and his deputy Rakesh Asthana, were both divested of their responsibilities and several officers were transferred in a twist to the massive internal battle within the agency.

Attacking the government, the Congress and other opposition parties alleged "Rafale-phobia".

"The Prime Minister's message is clear, whoever comes near Rafale will be removed, wiped out. The country and the constitution are in danger," tweeted Rahul Gandhi.

Addressing a public rally in Rajasthan's Jhalawar district, Mr Gandhi said that the prime minister sought votes saying he wanted to become the 'chowkidar' of the country but "the 'chowkidar' committed theft".

The Congress chief alleges that PM Modi closed the massive Rs 59,000 crore deal for 36 Rafale fighter jets from France without any transparency. He also accuses the government of helping Anil Ambani's inexperienced Reliance Defence win a partnership with Rafale-maker Dassault at the cost of state-run Hindustan Aeronautics Ltd (HAL).

Congress leaders questioned today if Alok Verma was "sacked" for his keenness to probe the "layers of corruption" in the Rafale scam.

Apart from protecting Asthana from investigation, the Rafale complaint by Shourie, Sinha & myself, entertained by the CBI Director, must be another reason for the Govt to remove him with such alacrity by this midnight order https://t.co/vKrR4a9God

"Apart from protecting Asthana from investigation, the Rafale complaint by Shourie, Sinha & myself, entertained by the CBI Director, must be another reason for the Govt to remove him with such alacrity by this midnight order," Mr Bhushan said in another tweet.

The CBI chief's meeting with Mr Shourie and Prashant Bhushan, when they asked for an inquiry into the Rafale deal earlier this month, reportedly upset the government. "It is unheard of that the CBI director personally meets complainants, especially given that they are politicians," a senior cabinet minister told NDTV.

But the government rubbished the opposition's charge.

"I regard this as rubbish. Three opposition parties are saying that we know what the agency was going to do next (Rafale probe). This cast doubts on the fairness of the probe," said union minister Arun Jaitley.