"Azamgarh Should Be Renamed...": Yogi Adityanath On Akhilesh Yadav's Turf

UP Assembly Election 2022: The rally saw Amit Shah endorsing Yogi Adityanath as the BJP's Chief Minister candidate ahead of the state elections due next year. 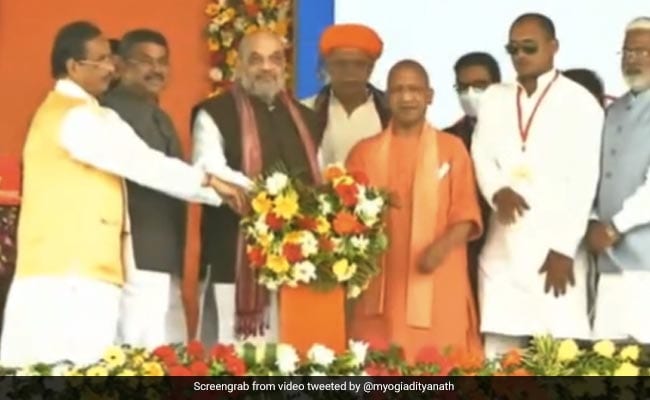 Home Minister Amit Shah and Uttar Pradesh Chief Minister Yogi Adityanath today addressed a rally in Azamgarh - rival Akhilesh Yadav's turf - where they launched a relentless attack on the Samajwadi Party chief. The Chief Minister, who has been criticised in the past over the spree to rename places in the state, today went on to suggest a name change for the Lok Sabha constituency - "Aryamgarh".

Hitting out at Samajwadi Party patriarch Mulayam Singh Yadav and his son, Yogi Adityanath stepped up the attack: "Azamgarh may have given two former Chief Ministers or sent them to the Lok Sabha but because of them, the identity of Azamgarh has always been lowered. Before 2014, a person from Azamgarh had problems in even getting a hotel room anywhere in the country... such was the identity crisis."

"There has been a demand to rename Azamgarh to Aryamgarh," the Chief Minister added.

Several places across the state have been renamed since Yogi Adityanath took charge in 2017, bringing him under attack from the rivals.

While Allahabad was renamed Prayagraj, Faizabad was renamed Ayodhya. Earlier this year, a gram panchayat or a local body in Unnao proposed changing the name of a block in the district from 'Miyanganj' to 'Mayaganj' - the latest in the series.

"The new state university will ensure Azamgarh will definitely become Aryamgarh," the Chief Minister said today. Amit Shah was in the constituency to lay the foundation stone for the university.

Continuing his tirade against Akhilesh Yadav, Yogi Adityanath asked the crowd, "I want to ask the people of Azamgarh... did your Lok Sabha MP even come to you to find out how you were doing?"

When he got a resounding "no" as a response, he said: "Now that elections are approaching, they will come and misguide you." He also slammed the former governments for what he described as "poor law and order", referring to a 2004 shootout incident at a college.

The rally also saw Amit Shah endorsing Yogi Adityanath as the BJP's Chief Minister candidate ahead of the state elections next year.

"I have said earlier that we never get enough Vidhan Sabha seats in Azamgarh ... but ab bahut ho gaya (that's enough). I am asking you to give all Vidhan Sabha seats here to the BJP so that Yogi Adityanath can be made the Chief Minister again," the Home Minister said. The BJP is eyeing a second straight term in the state.

Amit Shah's endorsement comes after the BJP huddles earlier this year over the UP election strategy as Yogi Adityanath faced tremendous criticism over the handling of Covid.

"(PM) Modi ji has a "JEM" idea for India and UP - "J" for Jan Dhan bank accounts, "A" - Aadhar Card and "M" for mobile phones for everyone. When I said this in Gujarat, the Samajwadi Party said they have a gem too. I asked a journalist what the SP's "gem" means, and he said their "jem" means "J" for Jinnah, "A" for Azam Khan and "M" for Mukhtar. Now you tell me do you want our "JEM" or the Samajwadi Party's?" Amit Shah asked the crowd.

"As the election approaches, Akhilesh Yadav has started seeing greatness in Jinnah. People from the minority community are sitting here. Does anyone feel Jinnah is great? No one. It's only Akhilesh Yadav who feels this," he added.

Akhilesh Yadav's October 31 remark had led to a war of words. The comment was - "Sardar Patel, Mahatma Gandhi, Jawaharlal Nehru and Jinnah studied at the same institute and became barristers. They became barristers and they fought for India's freedom. They never backed away from any struggle."

In the face of criticism, he later justified using the name of Pakistan's founder. "Why should I give the context. I would say read the books again," he had said.

Interestingly, Akhilesh Yadav, who is in Gorakhpur, Yogi Adityanath's stronghold, also targeted the ruling party at a public gathering "The people of Gorakhpur were expecting a change and development but they have been disappointed and betrayed. I've come here to appeal to them to support the Samajwadi Party. The BJP should not be worried about the 2024 polls, but more concerned about answering questions of their wrongdoings today: fuel price hike, inflation, unemployment...."