In A First, Government 'Celebrating' Death, Suffering: Left On Demonitisation

Addressing the gathering, several Left leaders spoke about the distress of farmers, and of people losing jobs. 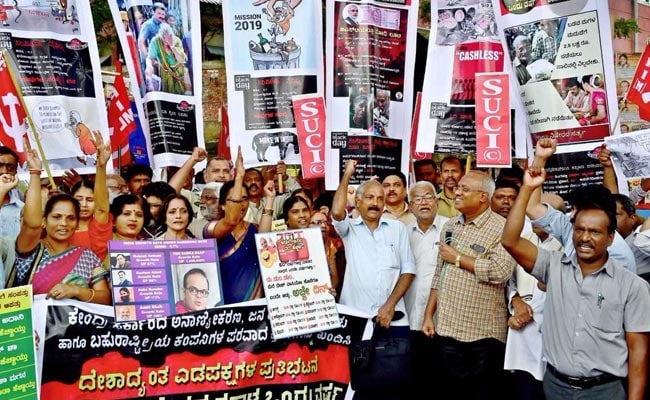 Six Left parties took to the streets to protest against the demonetisation policy. (Bengaluru)

New Delhi: The Left today lashed out at the Narendra Modi government, saying that for the first time in India's history, a government was "celebrating" death and suffering.

Six Left parties, which took to the streets to protest against the Centre's demonetisation policy, said the government had set two records -- making people lose their lives in queues and helping hoarders change black money into white.

"The Modi Government has created two records in the world. One, it made people stand in queues and many people lost their lives; Second, though Modi tried to tell the people and the world that by demonetisation he would stop black money, in reality he has helped hoarders change black money into white," CPI(M) leader Brinda Karat said at the rally on the first anniversary of demonetisation.

"For the first time in the history of India, a government is celebrating the deaths and the sufferings of people," she said, referring to the Centre's programmes to commemorate the first year of the move.

The BJP is observing the first anniversary of demonetisation as "anti-black money day".

Addressing the gathering, several Left leaders spoke about the distress of farmers, and of people losing jobs.

"Farmers are committing suicide and workers are losing their jobs, but the government has not yet admitted their mistake (about demonetisation)," said CPI leader Atul Anjan.

Mr Anjan added that with the note ban, PM Modi had created "hell" for the people. He claimed that workers had lost their lives and factories were shutting down.

The Opposition parties said the government had slowed down the economy and was responsible for the hardship that people faced.

Promoted
Listen to the latest songs, only on JioSaavn.com
"Demonetisation followed by GST (Goods and Services Tax) has created an economic disaster. It has created neither job growth nor economic growth," CPI leader D Raja said.

The six Left parties -- CPI(M), CPI, All India Forward Bloc, Revolutionary Socialist Party, Communist Party of India (ML- Liberation) and Socialist Unity Centre of India (Communist) -- said they would continue to build a "strong public movement" across the country with other secular parties against the "anti-people policy" of the government.