Mr Sidhu had demanded that his party declare a chief minister candidate as recently as this morning. 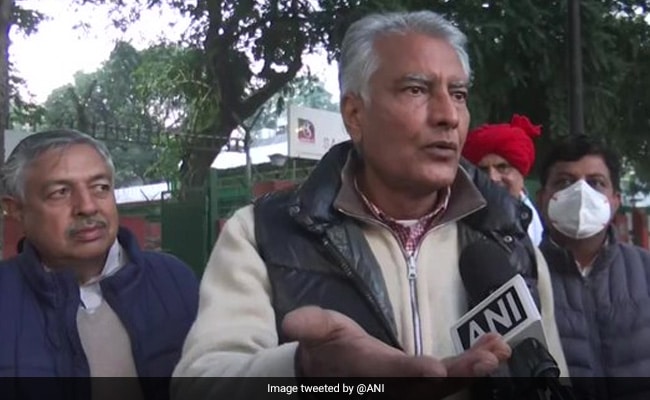 The Congress will contest Punjab elections under a joint leadership, Sunil Jakhar said.

In a blow to Punjab Congress chief Navjot Singh Sidhu, who is said to have been positioning himself as the chief minister candidate of Congress in the state, a senior party leader confirmed rumors that Congress won't announce a Chief Minister face for the upcoming state assembly elections. Sunil Jakhar, Chairman of the campaign committee of Punjab Congress, told news agency ANI that the party will contest under a "joint leadership".

The move is aimed at balancing caste equations in the state and preventing infighting within the party. The top faces of the party in Punjab come from diverse communities, aimed at strengthening numbers by tapping into vote banks of all electorally significant groups.

The chief minister Mr Channi is from the Dalit community, state party chief Mr Sidhu is a Jat Sikh, Mr Jakhar, a Jat, is heading the election campaign committee, and two deputy chief ministers - Sukhjinder Singh Randhawa, a Jat Sikh, and OP Soni from the Hindu community. The grand old party appears to try to make a delicate balance.

Punjab Congress had gone through a massive crisis earlier this year after an open rebellion by party leaders that ended in the unceremonious removal of Amarinder Singh from the post of the chief minister. The state then got its first Dalit chief minister in Charanjit Singh Channi.

Mr Sidhu had demanded that his party declare a chief minister candidate as recently as this morning. "What's a baraat without a dulha," he quipped in an interview with CNN-News18, adding that the right chief minister was crucial to avoid a crisis.

Mr Jakhar also said the winnability of a candidate will be the biggest factor in the ticket distribution for the Assembly polls in the state and that the party will make sure that only one person from one family gets the ticket to contest elections.

"The biggest basis for distribution of tickets is the winnability of a candidate. Another important factor will be that only one person from one family gets a ticket to contest the election," said Mr Jakhar.

Taking a swipe at the Bharatiya Janata Party (BJP), which is considering virtual rallies in view of Covid and its Omicron variant, Mr Jakhar asked why the ruling party at the Centre did not consider the same during West Bengal polls earlier this year and in Uttar Pradesh for upcoming elections next year.

"They are running away from facing the people. They do not even have excuses now. Earlier, there were farmers and their protests. Now even they have gone. Why are they running away now?" he questioned.

Union Minister Gajendra Singh Shekhawat on Wednesday said the Bharatiya Janata Party (BJP) is ready for virtual election rallies and the party will follow the Election Commission's guidelines issued regarding polls in the wake of the emergence of the Omicron variant of Covid.