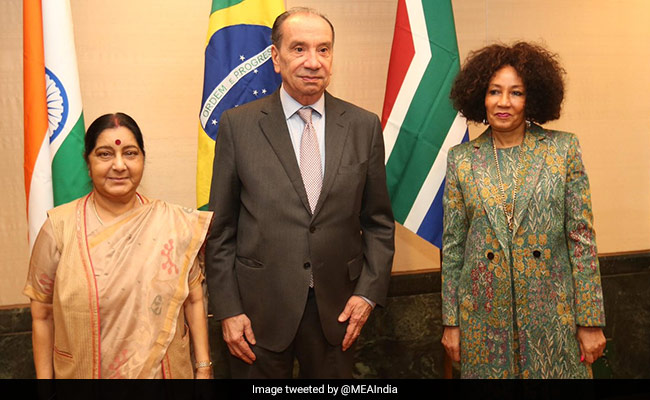 Sushma Swaraj said terrorist use sophisticated equipment that are financed through illegitimate sources.

It is incumbent to dismantle the support infrastructure of terrorist organisations as their access to funds, finances and technology enables them to carry out attacks with "impunity", India has said as it called for making the UN counter-terrorism mechanism efficient in listing terrorists and their outfits.

"Terrorism, non-state actors, and illicit financial flows undermine the very cause of development and prosperity. Terrorist organizations use sophisticated equipment, weapons, and ammunitions that are financed through illicit and illegitimate sources," she said.

"Allowing them access to funds, finances, information, weapons, and technology enables them to carry out attacks with impunity. It is incumbent therefore to dismantle their support infrastructure," she said.

Ms Swaraj said India's proposal on Comprehensive Convention against International Terrorism (CCIT) will fill in the significant vacuum to combat the scourge of terrorism.

"United Nations' counter-terrorism mechanism should be made efficient in listing terrorists and their outfits. Implementation of FATF (Financial Action Task Force) standards, across all jurisdictions, will strengthen international efforts in addressing terrorism," she said.

Referring to Prime Minister Narendra Modi's emphasis on reforming global institutions and his call for "reformed multilateralism", Ms Swaraj said IBSA countries have been at the forefront on initiating reform of global institutions.

"However, above all these, we three have to ensure that our collective voice is heard clearly in BRICS and other groups on UN Security Council reforms, since if we don't speak up for our own interest, no else will," she said.

"We are deeply concerned with continuing tensions on the border between Gaza Strip and Israel. India firmly believes that the dialogue is the only viable option to effectively address the issues in that region," she said.

The Ministers also discussed IBSA events planned for 2018-19 to mark the fifteenth-anniversary of IBSA. The Ministers agreed to host these events in all three countries as well as on the margins of multilateral events/ fora.