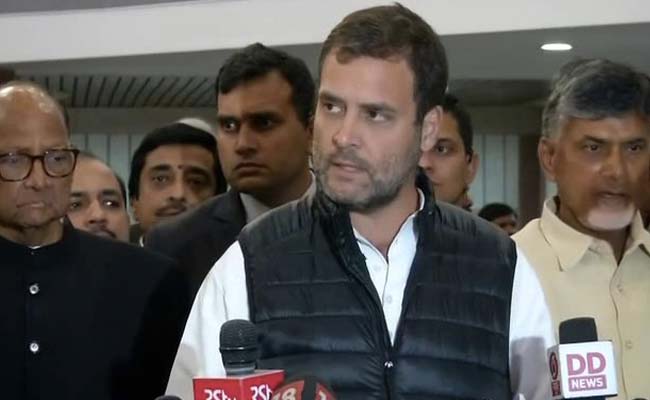 21 opposition parties have issued a joint statement, condemning the Pulwama terror attack, and lauding the courage of Indian Air Force pilots who destroyed a Jaish-e-Mohammed training camp situated in Pakistan. However, they have alleged that the ruling party -- the BJP -- was politicizing "the sacrifices made by our Armed Forces". Congress president Rahul Gandhi read out the statement.

Here is the full statement made by opposition parties

"The meeting of leaders of 21 political parties condemned the dastardly Pulwama terror attack by Pakistan-sponsored terrorists of Jaish-e-Mohammed on 14th February 2019. The meeting paid homage to our martyrs and expressed solidarity with our Armed Forces in crushing the menace of terrorism.

The meeting lauded the action taken by the Indian Air Force against the terrorist camp on 26th February 2019 and praised our Armed Forces for their valour and bravery. The meeting of 21 parties expressed their deep anguish over the blatant politicization of the sacrifices made by our Armed Forces by leaders of the ruling party. National security must transcend narrow political considerations. The leaders observed that the Prime Minister has, regrettably, not convened an-all party meeting as per the established practice in our democracy.

The leaders expressed concern on the emerging security situation. Post the statement from the MEA regarding targeting of our military installations and loss of one fighter aircraft, the leaders condemned the Pakistani misadventure and expressed their deep concern for the safety of our missing pilot. Leaders urged the Government to take the nation into confidence on all measures to protect India's sovereignty, unity and integrity."

"50 MLAs With Us, Will Pass Any Floor Test": Rebel Sena Leader Eknath Shinde