The Air Force chief had said "Rafale was badly needed" and the top court gave a "very fine judgment". He also called the Rafale deal a "game changer". 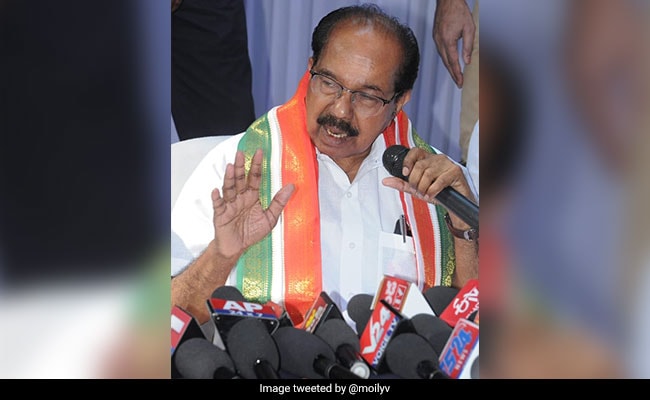 Senior Congress leader Veerappa Moily on Thursday took issue with Indian Air Force chief BS Dhanoa, who has expressed admiration for the Rafale deal and the Supreme Court's judgment in the case. Air Chief Marshal Dhanoa is "lying" by suppressing the truth about Rafale, Mr Moily said. He later retracted the statement saying he did not accuse the air chief of lying.

The senior Congress leader said the IAF chief had visited the Bengaluru headquarters of the Hindustan Aeronautics Limited days before Prime Minister Narendra Modi finalized the 36-aircraft deal and found it a "competent body with necessary expertise". For the visit, he was accompanied by the head of Dassault Aviation, the firm that manufactures the Rafale fighter jets.

The Air Force chief had said "Rafale was badly needed" and the top court gave a "very fine judgment". He also called the Rafale deal a "game changer".

India has not inducted any new aircraft in the Air Force since 1985, IAF officers had said during the Rafale hearing in the top court.

Later, however, Mr Moily retracted and said: "The question is, is he justifying it on the basis of the Supreme Court judgement which is flawed? In the light of this, whether the IAF chief can again certify that this is fine. I am asking him that question. I never called him a liar. If this HAL is fine... Both of them cannot be fine."

The Supreme Court had refused to order an investigation into the Rafale deal, saying there is no reason to doubt the decision-making process behind it. It was a massive validation for the government, which has been repeatedly accused of corruption by the Congress in the Rs. 59,000-crore deal.

But after the Centre requested the Supreme Court to correct a "factual error" in its judgment, the Congress accused the government of perjury for submitting "wrong information" in court. The party has also demanded a Joint Parliamentary Committee be formed to investigate the deal.

The government has accused the Congress of running from a discussion on the deal in parliament and accused party chief Rahul Gandhi of spreading disinformation.