This evening's protest is the latest in a series of confrontations between Delhi Police and members of the public.

The Chandni Chowk Metro station has been temporarily closed as a result of the violence.

Hours after Bhim Army chief Chandrashekhar Azad led a massive protest against the new citizenship law at Delhi's Jama Masjid and called for a protest march to Jantar Mantar, hundreds of protestors defied prohibitory orders and took to the streets of the national capital this evening in fresh protests against the controversial law. Delhi Police had denied permission to the Bhim Army chief to conduct the protest march.

In dramatic visuals the protestors - who were carrying Indian flags and "Save the Constitution" banners and marching from Jama Masjid in Old Delhi to Jantar Mantar in the centre of the city - were stopped at Delhi Gate as Delhi Police put up barricades to block them control the situation.

Swelling by the minute, the crowd of protestors had refused to back down and disperse peacefully and, as tensions rose, a vehicle was set on fire outside the Daryaganj Police Station, forcing the cops, who had deployed anti-riot Vajra vehicles, to resort to water cannons and lathi-charges to disperse the crowd and control the situation.

Delhi Police, who came under fire for allegedly deploying excessive force in quelling protests on Sunday involving students from Jamia Millia Islamia, confirmed they neither lathi-charged protestors nor used tear gas this evening.

"We used mild force and water cannon... did not lathi-charge protesters or lob tear-gas shells," MS Randhawa, the Delhi Police PRO, was quoted by news agency PTI. Delhi Police also said several of its personnel had been injured and some protestors had been detained.

At least 11 protestors were injured and taken to the LNJP Hospital.

Delhi Metro has closed multiple stations in response to the violence, including the busy Rajiv Chowk, Pragati Maidan and Khan Market stations, to restrict movement of the protestors.

Earlier today Chandrashekhar Azad escaped police custody and ran after leading a powerful protest at the Jama Masjid. He had been detained, with hundreds of supporters, after the agitation in Old Delhi during which he shouted slogans and waved flags from the steps of the historic mosque.

Shortly after the events in the Jama Masjid, protests also broke out in 13 Uttar Pradesh districts after Friday prayers. Faced with large crowds, stone-pelting protestors and vehicles being torched, cops resorted to lathi-charges and used tear gas to dispel crowds and control the situation. 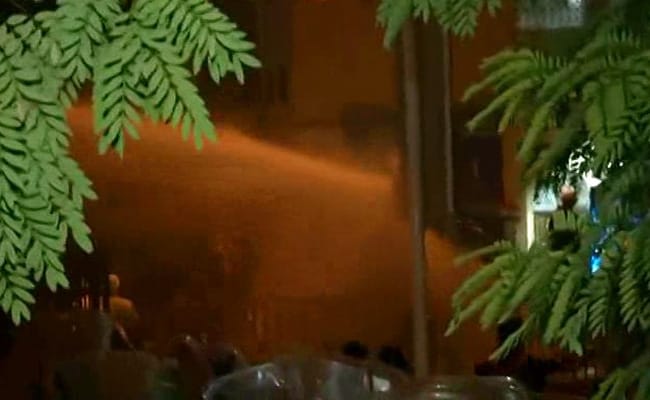 Delhi Police resorted to water cannons to disperse the protestors

This evening's protest is the latest in a series of confrontations between Delhi Police and members of the public; on Thursday prohibitory orders were imposed and internet suspended in parts of the city, including ITO where several newspapers are based.

On Tuesday afternoon a school bus was damaged and a police booth was set on fire as clashes erupted at Seelampur in east Delhi. The police used batons and fired tear gas shells as some 2,000 protesters threw stones and set fire to vehicles 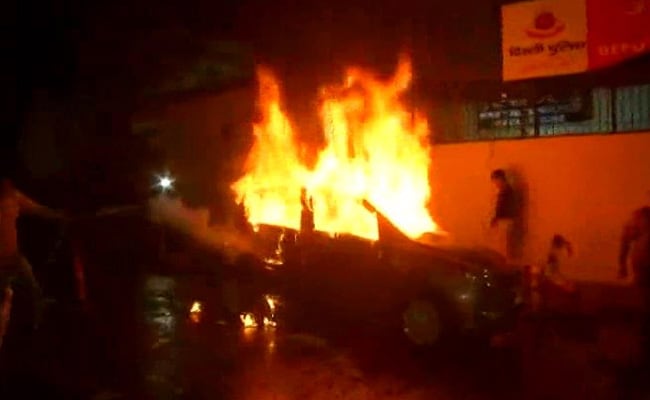 In disturbing visuals, armed policemen in riot gear were seen facing a large crowd in Seelampur, a thickly-populated neighbourhood in northeast Delhi prone to flare-ups. Protesters were seen throwing bricks at the police.

Buses and cars were left damaged and roads strewn with rocks, debris and paper after the clashes. Small fires on the road sent smoke into the air, along with the tear gas. The police said two bikes of traffic cops were burnt.

More than 20 people, including 12 policemen were injured, according to news agency PTI.

On Sunday Delhi Police clashed with students from Jamia Millia Islamia after what started as a peaceful protest march against the Citizenship (Amendment) Act, or CAA, turned violent. Ten people - none of whom were students - were arrested and sent to judicial custody after violence turned a posh South Delhi colony into a war zone.

The CAA seeks to make it easy for non-Muslim refugees from Afghanistan, Pakistan and Bangladesh to become Indian citizens. It has been heavily criticised - by the opposition and civil society - as discriminating against Muslims and violating Article 14 of the Indian Constitution.