Overnight Tunnel Rescue In Uttarakhand For 39, Day After Glacier Burst

The 12-foot high and 15-foot wide tunnel at Tapovan in Chamoli was blocked with slush and debris.

A massive operation has been on since Sunday night to rescue some 39 people believed to be trapped inside a tunnel after a glacier burst in Uttarakhand on February 7 caused flash floods that left 18 dead and over 200 missing.

The 12-foot high and 15-foot wide tunnel at Tapovan in Chamoli was blocked with slush and debris, trapping workers of an NTPC thermal power plant that was washed away. The tunnel is over 2.5 km long with just one entry and bifurcates into two, officials said, adding that it was hard to tell where the workers were trapped or whether they were together at all.

An official said it was believed that 34 people were trapped in one of the offshoots and five in the other. There has been no contact with any of them so far.

Earthmovers and shovels were used by hundreds of personnel and locals in the night-long mission to unclog the tunnel's opening. In the day, personnel held sticks for better grip as they entered the sludge-filled tunnel.

Rescuers were seen in images and videos carrying wooden planks that are to be used to wade in through the slush and help create a platform to pull out the trapped people.

Teams are on standby with dragon light sets, oxygen cylinders and stretchers to provide immediate help to those brought out. 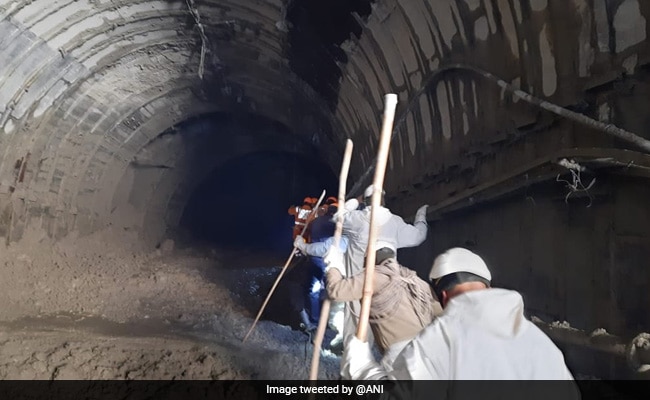 Earthmovers and shovels were used by hundreds of personnel and locals in the night-long mission to unclog the tunnel's opening.

Over 300 personnel of the Indo-Tibetan Border Police (ITBP) and 200 others from the army and disaster teams are involved in the operation.

"About 100 metres inside the tunnel is cleared and accessible, and it looks like about 100 metres of debris more will have to be cleared. This will take a few more hours," an ITBP officer told NDTV.

At least 12 workers were rescued from a smaller tunnel in the same area on Sunday evening.

On Sunday, a part of a glacier burst in Chamoli, triggering an avalanche and a deluge in the Alaknanda river system that washed away hydroelectric stations and five bridges. The burst glacier also swept away roads and forced authorities to evacuate villages.

The Uttarakhand government has made the following helplines for the Disaster Operations Center available to those stuck in affected areas or in need of any help: 1070 or 9557444486.