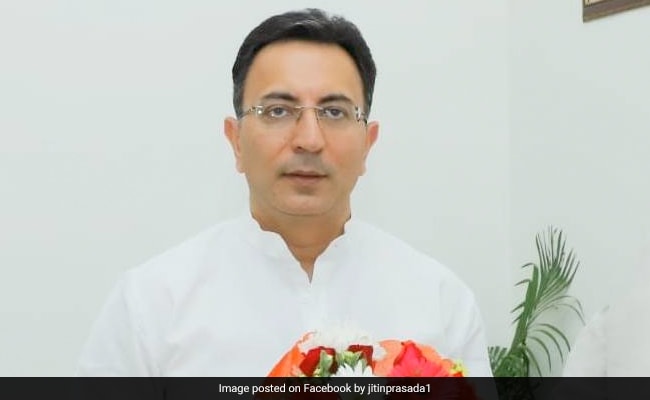 Uttar Pradesh Minister Jitin Prasada, who quit the Congress and joined the BJP in June last year just before the assembly election, on Wednesday found an opportunity to troll Kapil Sibal, nearly a year after Mr Sibal - who himself left the Congress today - tweeted a swipe at his former Congress colleague for joining the rival party.

Mr Prasada, 48, was the Congress's top Brahmin face in UP and once close to Rahul Gandhi.

The day Mr Prasada bade farewell to the Congress, Mr Sibal had tweeted a swipe at him, with a wordplay on his name.

"Jitin Prasada joins BJP. The question is will he get 'prasada' from BJP or is he just a 'catch' for UP elections? In such deals if 'ideology' doesn't matter changeover is easy," Mr Sibal, 73, had tweeted.

But Mr Sibal announced today he would contest the Rajya Sabha election as an independent candidate supported by Akhilesh Yadav's Samajwadi Party, a move that gave an opening to Mr Prasada to tweet his payback.

Later today, in an interview with NDTV, when asked about the tweet by the BJP leader, Mr Sibal said, "I don't know which Prasad he is talking about. Only his name is associated with it, not mine."

Mr Prasada was the second high-profile Rahul Gandhi aide to move to the BJP after Jyotiraditya Scindia left in 2020. His frustration with his party of 20 years was no secret; he was part of the "G-23" or group of 23 Congress leaders who had demanded from Congress chief Sonia Gandhi sweeping reforms in the party.

Mr Sibal, too, a top lawyer who has represented politicians across the spectrum and once among the senior-most leaders of the Congress, was the driving force behind the "G-23" dissenters.

He has been vocal and increasingly sharp in his criticism of the Gandhis' leadership, especially Rahul Gandhi. He had also openly called for a non-Gandhi as Congress chief.