"The objective is to get 30 minutes at one spot. Some people support us, others come and argue with us," said Syed Faheem, who has organised regular flash protests through WhatsApp messages that are amplified via social media. 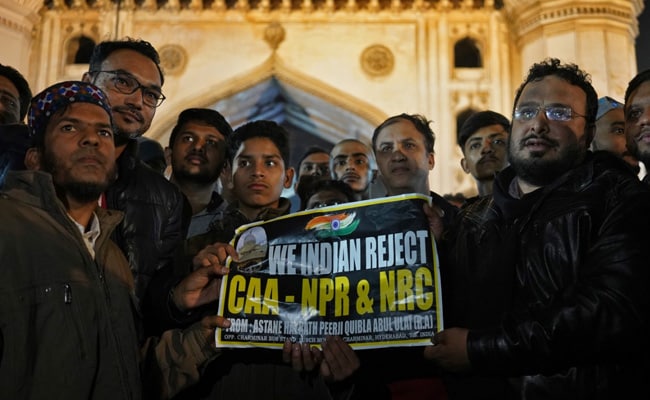 People take out a flash protest against the Citizenship Amendment Act in Hyderabad.

Before midnight on New Year's Eve, a call to action was sent on a private WhatsApp group - within the hour, dozens gathered in the centre of Hyderabad, many holding banners to protest the new citizenship law.

Police quickly dispersed the group and briefly detained six people, but for Syed Faheem - who formed the WhatsApp group - it marked another successful flash protest, inspired by tactics used by protesters in Hong Kong.

Faheem, a software consultant, is one of a growing group of opponents to the new law who have begun to borrow tactics used in protests from Hong Kong to Paris, to protest the legislation that critics say discriminates against Muslims. 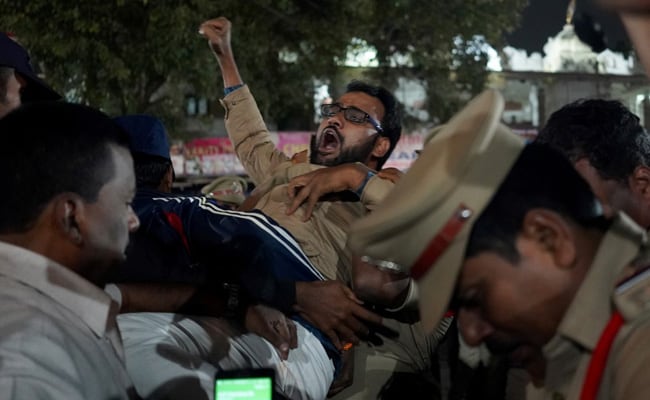 A Citizenship Act protester as he is detained during a flash protest in Hyderabad.

In Hyderabad, some protesters say it is impossible to secure police permission to hold demonstrations, forcing them to adopt new tactics to show dissent.

"The objective is to get 30 minutes at one spot. Some people support us, others come and argue with us," said Faheem, who has organised regular flash protests through WhatsApp messages that are amplified via social media.

The location of the protests, which change daily, are posted just an hour or two in advance, with the exact spots shared just minutes ahead of time.

Hyderabad's police chief Anjani Kumar told Reuters people are being permitted to gather in areas such as sports grounds, or indoor auditoriums to protest, but added: "We've not given permission for any rally or procession because that affects traffic."

In Hong Kong, where anti-government demonstrations have raged on for months, protesters adopted a "be water" strategy, inspired by martial arts legend Bruce Lee, popping up in different locations almost daily to catch authorities flat-footed.

Sharjeel Imam, who helped organise a New Delhi sit-in protest against the new law that has run for weeks, said he plans to adopt the flash mob strategy to keep the agitation going.

In Hyderabad, the idea to copy Hong Kong's play-book came as protesters sought ways to run a long-term campaign that police would find hard to curb, two members from Faheem's group said.

"Hong Kong has been pivotal....It was very inspiring," said a 30-year-old IT professional, who declined to be identified.

After police restricted protests in Bengaluru, students at the Indian Institute of Management in the city took inspiration from 2015 protests in Paris where shoes were put on display - in place of cancelled protests - to support action against climate change. Students also borrowed ideas from the 1975 protests against the imposition of Emergency.

"Police weren't letting us place placards with any messages, so we copied what the press did in 1975 and left blank placards with 'Concerned Citizens of IIM-Bangalore' written on them," a student involved in the protest said.

"Generations later, when they ask us what we did when they came for the Muslims, I at least want to be able to say - 'We tried'", she said.