The HAM or amateur radio operators are licenced to conduct such communications under specific radio frequencies by the Union Ministry of Communications. 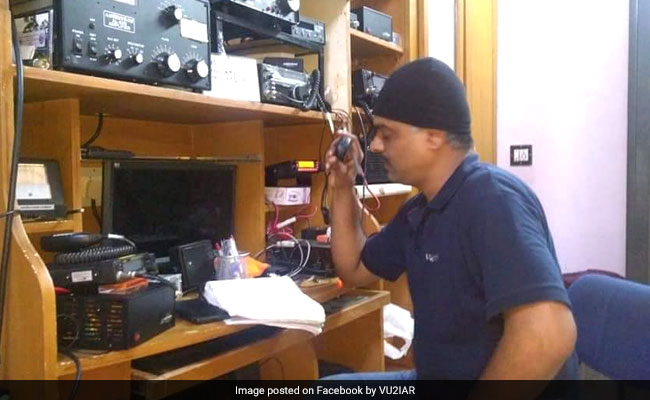 HAM radio operators are helping in rescue operations in flood-devastated Kerala by tracing stranded people through their last mobile phone location and sharing information with officials as most communication services remain hit in the state.

The HAM or amateur radio operators are licenced to conduct such communications under specific radio frequencies by the Union Ministry of Communications.

Over 300 HAM radio operators are working round-the-clock in Kerala and are helping the administration in rescue operations, Director of the Hyderabad-based National Institute of Amateur Radio, Ram Mohan Suri, said.

Mr Suri said 1,650 people were rescued based on HAM radio support from the Thiruvananthapuram centre from August 16 to August 19.

"We had received 7,400 wireless messages during that period. Whatever information we are getting we are sharing it with district officials and rescue teams.

In places where people are stranded and cannot communicate as their mobile phones are not working, HAM radio operators are tracking the last location of their phone's signal. Based on it, they are trying to locate the person, another HAM operator said.

"By using this method we have rescued several people who are trapped in various buildings and cannot communicate," he said.

HAM radio uses radio frequency spectrum to exchange messages with other radio operators. Each one of them are assigned a call sign for identity.

The flood in Kerala has claimed over 200 lives while a million displaced people have been sheltered in 5,645 relief camps dotting the state.

Not only have the HAM operators helped in rescuing and locating residents of Kerala, but also people from other parts of the country stranded in the state.

Shankar Satyapal, Director of Indian Institute of HAMs (IIH), Bengaluru, said HAM operators from across the country are passing on information to IIH, which in turn is passing it on to their counterparts in Kerala and vice-versa.

"The success rate is 70 per cent where we have been able to rescue people from other states stranded in Kerala," he said.

Five labourers of Murshidabad district in West Bengal, were rescued with the help of HAM radio operators, according to Ambarish Nag Biswas, secretary of the West Bengal Amateur Radio Club.

The labourers from Murshidabad district were stranded in a three storey under-construction building in the Ernakulam area and could not call for help as their mobiles were out of charge, he said.

Mr Biswas said the Murshidabad district administration called HAM Radio operators after the family members of the labourers got in touch with them.

"We got in touch with HAM radio operators in Kerala they tracked their last mobile signals and were later on rescued by the officials. We are now looking into three youths from North Bengal who are still stranded in Kerala," Mr Biswas said about the successful operation.