Maharashtra Assembly Elections 2019: On August 5 Amit Shah led the centre in announcing the withdrawal of Article 370 from Jammu and Kashmir, which was a key election promise for the BJP during national polls in April-May. 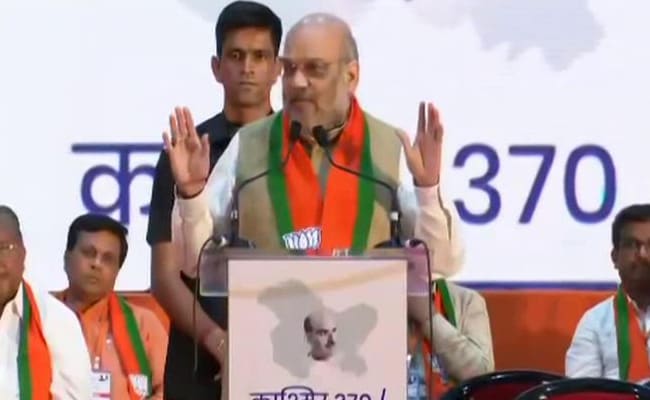 Home Minister Amit Shah was speaking at an event in Mumbai

Home Minister Amit Shah today targeted the Congress and Rahul Gandhi over the centre's "historic" decision on Jammu and Kashmir at a seminar in Mumbai, declaring that while the BJP had fought for "one nation, one Prime Minister and one constitution", the Congress had tried to play politics over an issue of national security. "Congress sees this as (a) political issue, we see it as nationalism," Amit Shah declared, also blaming former Prime Minister Jawaharlal Nehru for an "untimely ceasefire" in 1947 that contributed to the creation of Pakistan Occupied Kashmir (PoK).

"I congratulate PM Modi's bravery and grit. He removed Article 370 & 35A in the very first session of the Parliament as soon as we formed the government for the second time," Amit Shah told the gathered crowd, "To Rahul Gandhi, I would like to say our 3 generations fought to remove 370. It is not a political issue like you think".

"Keeping Article 370 active in Jammu and Kashmir is a political matter for Congress even today. For us, it was a matter of uniting the nation, a dream that PM Modi has made true," he said.

"The issue of Pakistan Occupied Kashmir (PoK) wouldn't be there had Jawaharlal Nehru not announced an untimely ceasefire in 1947 when the Army was fighting against the Pakistani infiltrators," Amit Shah added.

The issue of Pak-Occupied Kashmir wouldn't be there had Jawaharlal Nehru not announced an untimely ceasefire in 1947 when the Army was fighting against the Pakistani infiltrators in J&K, the Indian territory - HM Shri @AmitShah#BJPForUnitedIndia

Assembly polls in Maharashtra and Haryana are scheduled to take place on October 21. This will be the first election since the centre's decision to withdraw special status given to Jammu and Kashmir under Article 370 and the BJP has made it clear it will highlight the issue in its campaigns.

Congress view Article 370 as vote bank politics, we view this as patriotism. Therein lies the difference between Congress and the BJP - HM Shri @AmitShah#BJPForUnitedIndia

Prime Minister Narendra Modi has already set the tone in that regard, raising the issue at election rallies in Nashik in Mahrashtra and Rohtak in Haryana, where he spoke of his vision for Jammu and Kashmir - one that embraces Kashmir and recreates it as the "paradise" it once was.

Amit Shah looked to continue that line of thought in Mumbai today, accusing Mr Gandhi of political naivety in his stance on Article 370 and Jammu and Kashmir.

"Rahul baba needs to understand that politics should not be done on matters of national interests. He needs to study the national history and understand that taking the right stand is important on such issues," he preached to the former Congress President.

The Home Minister also said he was confident the BJP-led National Democratic Alliance would emerge victorious and that Chief Minister Devendra Fadnavis would return for a second term.

The Congress faces a real fight to unseat the BJP-Shiv Sena combine in the state amid a rash of defections from both parties. The struggling party won only 42 seats in the 288-member assembly in 2014, compared to the BJP's 122 and the Sena's 63.

The 2019 polls will provide a stern test of the BJP's performance in the state, with key issues such as farm loan waivers, job creation, the crisis in the auto industry and the government's handling of droughts and famines likely to influence voters.