Addressing the Lok Sabha in June, Home Minister Amit Shah had claimed the government's approach to combating terrorism had led to an improvement in law and order and indicated assembly elections could be held in six months' time 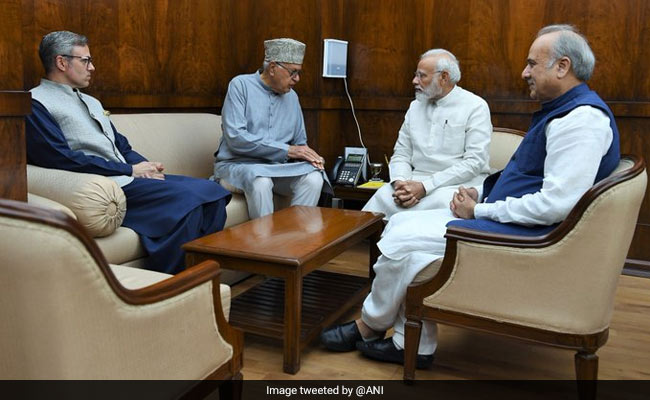 Former Jammu and Kashmir Chief Minister Omar Abdullah met Prime Minister Narendra Modi today and asked him to conduct elections in the state by the end of the year. Mr Abdullah, who was part of a National Conference delegation that included his father Farooq Abdullah, another former chief minister, also urged PM Modi to refrain from upsetting the fragile situation in the Kashmir Valley.

"We discussed two issues with the prime minister. We told him that no step should be taken which will lead to deterioration of the situation in the Kashmir Valley. We also told him that the assembly elections should be held before the end of the year," Omar Abdullah said after the conclusion of the 20-minute meeting, adding that he was satisfied with how it went.

The National Conference delegation's visit, and plea to keep the peace, comes less than a week after the centre announced it would move 10,000 troops to the state; the decision came after National Security Advisor Ajit Doval's visit to review the law and order situation.

"We apprised him about the people's feelings and also told him that there is tension in people's mind," Omar Abdullah said.

Addressing the Lok Sabha in June, Home Minister Amit Shah had claimed the government's approach to combating terrorism had led to an improvement in law and order and indicated assembly elections could be held in six months' time.

The delegation's visit also comes amid speculation the centre is trying to revoke Article 35A, which grants special privileges to permanent residents of the state.

Last month Ms Mufti had warned the centre against tinkering with the provision, saying it would be akin to setting a powder keg on fire.

Jammu and Kashmir has been under Governor's Rule since the BJP ended its short-lived ruling alliance with Mehbooba Mufti's People's Democratic Party last year.

The failure of that alliance, which was driven by the personality of the late Mufti Mohammad Sayeed, coupled with the February terror attack in Pulwama, led to dramatically raised tensions in the state. The unstable atmosphere also affected voter turnout for national elections in April and May, with the Anantnag constituency recording all-time lows.