Amit Shah had earlier said Prime Minister Narendra Modi has decided that the medium of running the government is the official language and this will definitely increase the importance of Hindi. 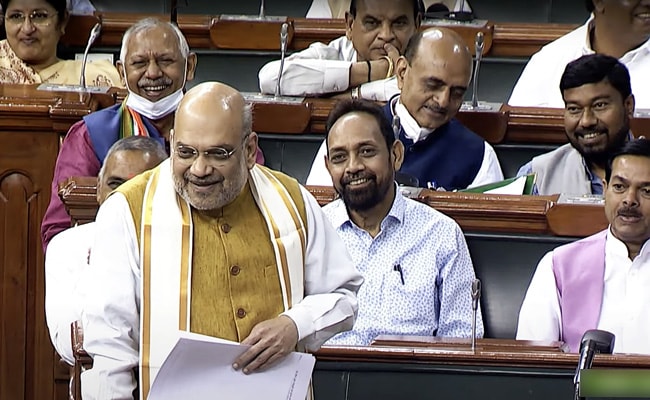 Amit Shah told Parliament that now 70 per cent of the agenda of the Cabinet is prepared in Hindi.

Home Minister Amit Shah's pitch for the Hindi language provoked trenchant criticism on Friday, with opposition parties calling it an assault on India's pluralism and asserting they will thwart the move to impose "Hindi imperialism".

The main opposition Congress accused Shah of trying to impose Hindi, and said in doing so he is doing a disservice to the language.

Congress leader Jairam Ramesh contended Hindi is 'Raj Bhasha' (official language) and not 'Rashtra Bhasha' (national language), as Rajnath Singh had noted in Parliament when he was the home minister.

"Hindi imperialism will be the death knell for India. I'm very comfortable with Hindi, but I don't want it rammed down anybody's throat. Amit Shah is doing a disservice to Hindi by imposing it," Ramesh said on Twitter.

Congress spokesperson Abhishek Singhvi said the home minister has tried to sermonise about Hindi which he should not.

"The home minister has tried to sermonise us about Hindi. I have already answered in Hindi. I am a great supporter of Hindi, but not of imposition, not of provocative politics, not of divisive politics," he told reporters at a press conference.

He also alleged that by raking up the issue of Hindi, the home minister is also trying to divert people's attention from inflation and price rise.

"Will your Hindi sermonising solve either inflation or unemployment- no. Your object is digression, diversion, derailing. Secondly, your objective is to create mutual distrust by imposition, by coercion," he said.

Don't conflagrate...don't give us sermons," he said.

Presiding over the 37th meeting of the Parliamentary Official Language Committee in New Delhi, Mr Shah had said Prime Minister Narendra Modi has decided that the medium of running the government is the official language and this will definitely increase the importance of Hindi, according to a statement issued by the Union Home Ministry.

He informed the members that now 70 per cent of the agenda of the Cabinet is prepared in Hindi.

Shah said now the time has come to make the official language Hindi an important part of the unity of the country, adding Hindi should be accepted as an alternative to English and not to local languages.

Tamil Nadu Chief Minister MK Stalin, whose DMK has been at the forefront of anti-Hindi agitations which often turned violent, said Shah's thrust on Hindi went against India's 'integrity and pluralism'.

The BJP top brass is continuously working towards causing damage to India's pluralism, Stalin, who is also the DMK president, said on Twitter.

"Does @AmitShah think that 'Hindi state' is enough and Indian states are not needed?" he asked. The Tamil Nadu chief minister insisted a single language will not help the cause of unity.

"You are making the same mistake again and again. However, you will not succeed!" Mr Stalin tweeted.

West Bengal's ruling Trinamool Congress said any effort to impose Hindi by the BJP-led Centre on non-Hindi speaking states will be resisted.

Noting that Hindi is not India's national language, Trinamool said Mr Shah's agenda of "one nation, one language and one religion" will remain unfulfilled.

"If Amit Shah and the BJP try to impose Hindi on non-Hindi speaking states, it will be resisted. The people of this country, where there is so much diversity, will never accept such a thing.

"Even India's first prime minister Jawaharlal Nehru had said that Hindi will not be imposed on non-Hindi speaking states until they are willing to accept it," senior Trinamool leader Sougata Roy said.

Echoing him, another senior Trinamool veteran Sukhendu Sekhar Ray said attempts to project Hindi as the national language is against the "spirit of the Constitution".

"We are against this agenda of Hindi imperialism... this is how fascism grows. Imposing Hindi is against the tenets of federalism," Mr Ray said.

Pro-Bengali advocacy organisations such as 'Bangla Pokkho' also said "Hindi imperialism" will not be tolerated.

Asserting that Hindi is not India's national language, former Karnataka chief minister Siddaramaiah accused the BJP of trying to unleash its agenda of "cultural terrorism" against non-Hindi speaking states.

"As a Kannadiga, I take strong offence to @HMOIndia @AmitShah's comment on Official language & medium of communication. Hindi is not our National Language & we will never let it to be," Siddaramaiah tweeted with the tagline "#IndiaAgainstHindiImposition".

Asserting that linguistic diversity is the essence of India, the Congress leader said pluralism is what has held the nation together.

"Imposing Hindi is a sign of coercive federalism rather than cooperative federalism. Myopic view of BJP regarding our languages needs to be corrected and their opinions are derived from pseudo-nationalists like Savarkar," he said.