The order, now withdrawn, applied even to state-run Doordarshan and All India Radio journalists

A notice asking for character certificates from journalists covering Prime Minister Narendra Modi's one-day visit to Himachal Pradesh tomorrow was withdrawn by the administration today as it triggered anger and disbelief.

The letter, dated September 29, had asked for a list of all press correspondents, photographers and videographers, "along with a certificate of their character verification".

Even state-run Doordarshan and All India Radio journalists were to comply with this.

The journalists were asked to submit the certificates "positively" by October 1. "Their access within the rally or meeting will be decided by this office," said the notification. 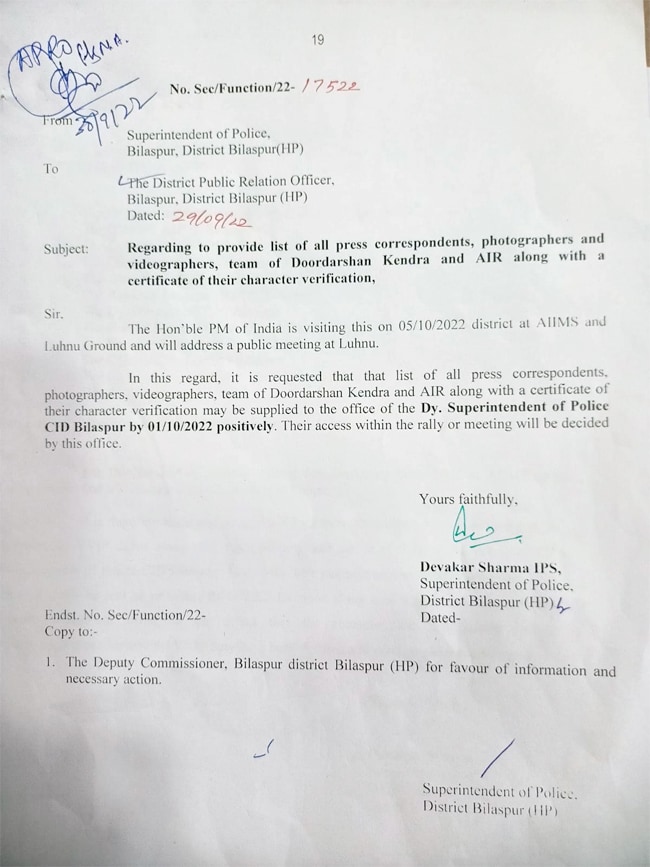 This morning, the Superintendent of Police, Bilaspur, put out a new notification with regrets.

"It is regretted that the letter was inadvertently issued by this office. The letter stands withdrawn," it said, adding that all media are "welcome" and their coverage will be facilitated.

Passes will be issued to all recommended by the government's media department, the new letter said.

"All journalists are most welcome to cover the Prime Minister's visit to Himachal Pradesh tomorrow. Himachal Pradesh Police will facilitate their coverage. Any inconvenience is regretted," Mr Kundu tweeted.

The retraction comes after journalists flagged the bizarre demand.

"Produce a character certificate in case you want to cover PM's Bilaspur rally. It is mandatory dear scribes. Please check. They are also suspecting official IDs. Where to go..." tweeted journalist Manjeet Sehgal.

"And the Himachal govt has now demanded a good character certificate from all journalists who wish to cover the PM's rally in the state headed for elections this winter," wrote Mrinal Pande, a senior journalist.

PM Modi's rally in Himachal Pradesh's Mandi was cancelled last month over bad weather. Elections are due later this year in the BJP-ruled state.