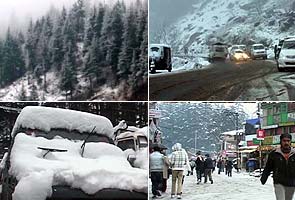 Manali/Srinagar: Heavy snowfall has made it difficult for locals to move out of their houses in Srinagar. Power supplies have also been cut, and to worsen the situation, a shutdown call was given by Syed Ali Shah Geelani, the hardliner separatist leader.

The heavy snowfall has resulted in Srinagar-Jammu highway being closed. Many flights were also cancelled due to low visibility.

Himachal Pradesh's Manali is also under the grip of heavy snowfall.

After three days of rain and snow, the weather has cleared in some parts of the state but blocked roads and sub-zero temperatures in higher reaches of the state affected normal life.

All roads beyond Shimla were blocked due to heavy snow, while traffic to Manali, Dharamshala and Chail was disrupted because of slippery tarmacs.

Due to snowy roads essential items to Shimla town reached late, while there was no service to upper part of the district as land link to the area was cut off.

The city experienced its coldest night in four years on Sunday with mercury settling at minus 3.3 degrees Celsius, five notches below normal.

Bad weather also hit power supply in many localities of the city, while sub-zero temperature froze water in supply pipes, which burst at many places.

Famous tourist resorts of Kufri, Fagu and Narkanda are covered under a thick snow blanket, with winter sports enthusiast waiting for roads to clear to hit the ski slopes there.

Solang ski slopes were covered under 120 cm to 150 cm of snow bringing cheers to ski enthusiasts.

A bright sunshine greeted people on Sunday morning, but it failed to warm the region due to heavy snowfall for the last three days.

The 350 km Hindustan-Tibet National Highway was blocked beyond Sanjauli due to heavy snowfall and vehicular traffic to Rampur was diverted via Dhami-Basantpur and Kingal.

The traffic to Manali remained disrupted, while road beyond the town was closed because of heavy snow.