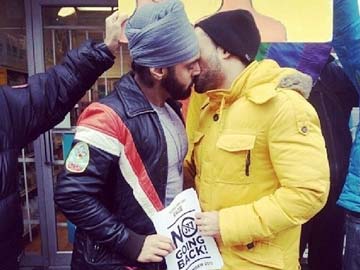 A gay Sikh man who was protesting against the Indian Supreme Court order restoring a ban on gay sex, alleges that he was blacked out of Facebook temporarily after he posted a photograph of himself kissing another man.

Saini, 32, was among the activists who had gathered in more the 30 cities across the world on Sunday for a protest called the "Global Day of Rage". His photo received over 1000 likes and 80 shares, along with some vitriolic comments. He alleges that on Monday, he received a message from Facebook saying his account had been suspended for 12 hours and his photo had been removed because it violated their terms and policies.

Promoted
Listen to the latest songs, only on JioSaavn.com
Saini is a speech-language pathologist and a disc jockey in Toronto. Buzzfeed quotes him as saying he was angry about the photo being deleted also because his posts "tease out important questions I want people to ask. So, the thread was people going back and forth with hate/rebuttals/logical rebuttals/dumb rebuttals...so important to our time in history."

There have been protests not only in India but across the world against the Supreme Court's ruling last week, which threw out another court's decision four years ago to scrap a 19th century ban on gay sex.