Defence Minister Nirmala Sitharaman tweeted to congratulate the team of "Uri: The Surgical Strike", about which she said she has been "hearing many good things" 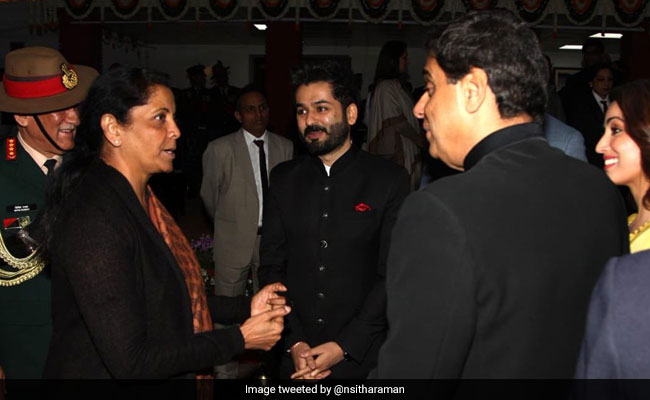 Nirmala Sitharaman meets with cast and crew of "Uri: The Surgical Strike"

Defence Minister Nirmala Sitharaman met the cast and crew of "Uri: The Surgical Strike" on the occasion of Army Day on Tuesday. Actors Vicky Kaushal and Yami Gautam, director Aditya Dhar and producer Ronnie Screwvala were part of the meeting that took place at General Bipin Rawat's "at home" function.

Ms Sitharaman took to Twitter to congratulate the film's team about which she said she has been "hearing many good things".

"At COAS Bipin Rawat's 'at home', with the team of the film 'Uri: The Surgical Strike'. Yet to watch it, but hearing many good things. Kudos, Ronnie Screwvala, Aditya Dhar Films, Vicky Kaushal, Yami Gautam for a slick war movie on the spirit of our heroes," the defence minister tweeted, along with some photos from the event.

The actors said they were honoured to meet the defence minister.

"It was an honour meeting you Ma'am," Mr Kaushal replied to Ms Sitharaman's tweet.

"We are honoured to meet you Ma'am... and thanks so much for your encouraging words. What you do for the nation is incomparable," tweeted Ms Gautam.

The film is based on the surgical strikes by the Army on terror launch pads across the Line of Control in September 2016, in retaliation to an attack in Jammu and Kashmir's Uri that killed 17 Army personnel.

Also featuring Paresh Rawal and Mohit Raina, the film was released on January 11.