"He Was Drunk, Abused Me": Punjab Congress MLA On Why He Hit 14-Year-Old

"I had asked the young boy to come and ask me a question. But when I gave him the mic, he abused me. That is why I slapped him," the Pathankot MLA said, rationalising his actions. 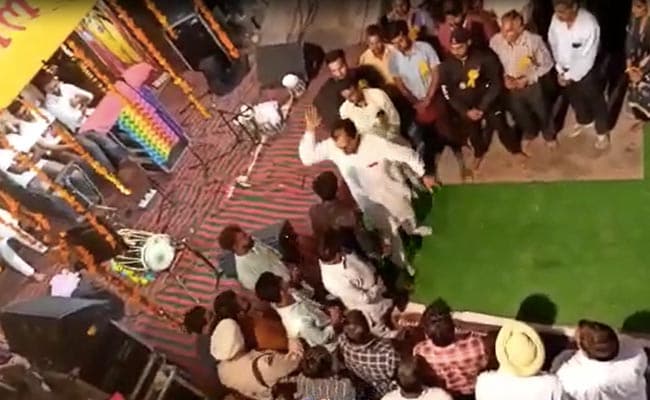 Punjab Congress MLA Joginder Pal, who was caught on camera assaulting a boy for asking him about the work done in his constituency, today justified his action claiming the boy was drunk and had abused him. This comes a day after the video of the incident went viral on social media and was widely condemned.

"I had asked the young boy to come and ask me a question. But when I gave him the mic, he abused me. That is why I slapped him," the Pathankot MLA said, rationalising his actions.

"This was a pre-planned incident. He is 14 years old and was drunk at the time, his mother has said. The boy also admitted that he was drunk and has apologised. So, I have forgiven him and the complaint against the boy has been withdrawn," the MLA further added.

The state government has released two videos - of the boy and his mother. "He has made a mistake. He was drunk when he attended the political gathering," the mother says in the video.

"I have made a mistake," the boy adds.

The incident took place in Pathankot's Bhoa area where the MLA was apparently talking about the work he has overseen in the village. The boy, standing away from the MLA, was caught on the video muttering and he was soon escorted away from the venue by the police. However, he continued questioning the MLA and, in an attempt to force a reaction from him, shouted, "What have you really done?"

Although initially, the MLA calmly asked him to come up front and handed him the microphone, he soon started brutally slapping and assaulting the boy. Worse, the cop who initially tried to lead the man away joined in on the assault, as did the half-a-dozen people standing around.

The unsavoury incident triggered a political row with the BJP declaring it showed the Congress' "intolerant" nature.

"After Rahul Gandhi and Priyanka Vadra turned out journalists from their PCs for asking factual questions, it is turn of Joginder Singh, Congress MLA from Boha in Pathankot, to thrash a young man black and blue for just questioning him. This is the intolerant face of Congress," tweeted BJP's Amit Malviya leading the pushback.

Punjab votes for a new government in a few months, with the Congress scrambling to ensure it retains a government in one of the (very) few states it still controls.