"Today, I Am A Dalit": Mamata Banerjee At Kolkata Rally On Hathras

West Bengal Chief Minister Mamata Banerjee attacks the BJP for "torturing Dalits, minority communities and farmers" at a rally to protest the UP government's handling of the Hathras alleged gang rape and murder. 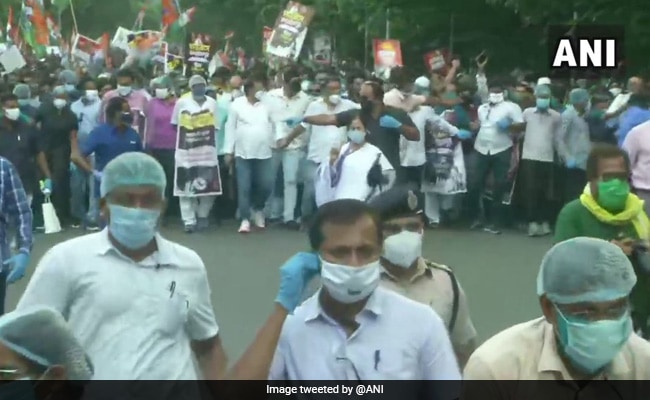 After leading a protest march in Kolkata against what has come to be known as the "Hathras horror", West Bengal Chief Minister Mamata Banerjee targeted the BJP governments in Uttar Pradesh and the centre for "torturing Dalits, minority communities and farmers". She said protest rallies against the party's "dictatorial ways" will continue in state's blocks and districts amid the coronavirus pandemic.

"Covid is a pandemic, but the biggest pandemic is the BJP party. The BJP is a pandemic of atrocities and I will support every effort to stop these atrocities. What do you (BJP) think, your police will not let us meet the family? I can meet the family tomorrow, and you won't even know. The daughter of Hathras is our daughter. If we are to brighten the country's future, we have to stand beside Dalits and minority communities... Today, I am not a Hindu, I am a Dalit," said the Trinamool Congress chief, who is preparing to fight next year's state Assembly elections with BJP as the main opponent.

Ms Banerjee addressed a rally - her first since the coronavirus pandemic broke out in March - a day after a team of Trinamool Congress members were barred from entering Hathras to meet the victim's family. While party MP Pratima Mondal was manhandled by the police, Derek O'Brien was wrestled to the ground.

Ms Banerjee also accused the BJP of talking big before elections, but keeping their reality "veiled". "During elections, the BJP leaders go to a Dalit house, get food from outside, eat it and claim they have eaten at a Dalit home. After elections, they will torture Dalits, thrash them," she said.

"BJP has brought shame to the country. Shame-shame BJP for what has happened to our daughter. I wanted to talk with the Hathras victim's family on the phone, but their phone had been snatched... the commission showed up at Hathras, but how many commissions came to manage Delhi riots?" she asked.

Ms Banerjee added that any attempt to speak about minority welfare is labelled as "Muslim appeasement".

"Who are you (BJP) to give a certificate (of approval)? You saw the drama in Mumbai (over Sushant Singh Rajput's death). We want justice for Dalits, not drama," she said.

Stating that there was no democracy in the country under the BJP, but a "dictatorship" Ms Banerjee said India was heading towards a "Presidential form of governance", and that the biggest "maha purush in the country was not Netaji or Gandhi or Ambedkar or Tagore or Bhagat Singh, but the BJP".

Responding to BJP's jibe on absence of rape data from West Bengal, the Trinamool Congress chief questioned the centre over its parliament responses of "no data" on migrant and farmer deaths.

"All of us will die one day. But not like a coward. BJP is not the future of the country. They will be defeated," she said, adding that the BJP stirs nationalistic sentiments for electoral gain, but later "sell Railways, Air India".