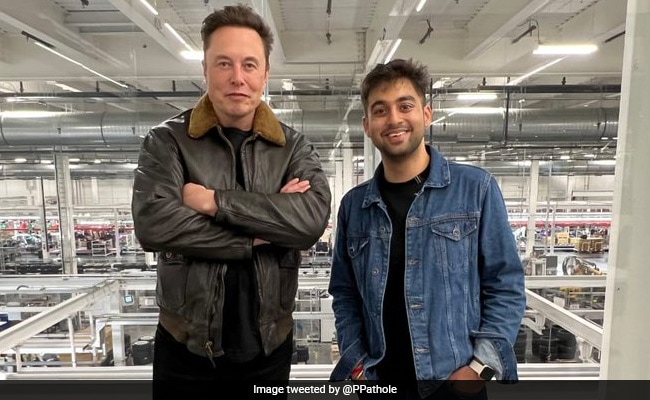 The first time Elon Musk responded to Pranay Pathole was in 2018. (File)

Pune-based software engineer Pranay Pathole, famously known for his unlikely friendship with the world's richest man, Elon Musk, came to his defence yesterday saying that the hate that Musk receives is "unfair".

Calling the tech giant an "inspiration", Pranay Pathole wrote on Musk-owned Twitter, "The hate Elon Musk receives is unfair. Elon is one of the greatest engineers of this generation. The man is solving climate change, reusable rockets, existential risk with AI, traffic, and free speech. He's an inspiration."

The hate @elonmusk receives is unfair. Elon is one of the greatest engineers of this generation. The man is solving climate change, reusable rockets, existential risk with AI, traffic, & free speech. He's an inspiration. pic.twitter.com/LTyQmgBUNQ

The tweet, which has been restricted for comments only from those that Mr Pathole follows or mentions, has over 41,000 likes.

The tech-entrepreneur, who works at the Tata Consultancy Services, had realised his dream of meeting Mr Musk in August this year. Friendship between the two spans over hundreds of tweets and private messages with headline-making company updates and even life advice.

The first time Musk responded to Mr Pathole was in 2018 when he, then aged 19, pointed out a flaw in Tesla's automatic windshield wipers.

After his dramatic takeover of Twitter, which he bought for $44 billion, the Tesla Inc boss said today that he will serve as its chief executive.

Army Soldier, 3 Others Arrested For Cheating Young People Over Jobs In UP