Ajay Chautala, who walked out of prison this morning for his two-week break, said the new government will work for the development of Haryana in the next five years. 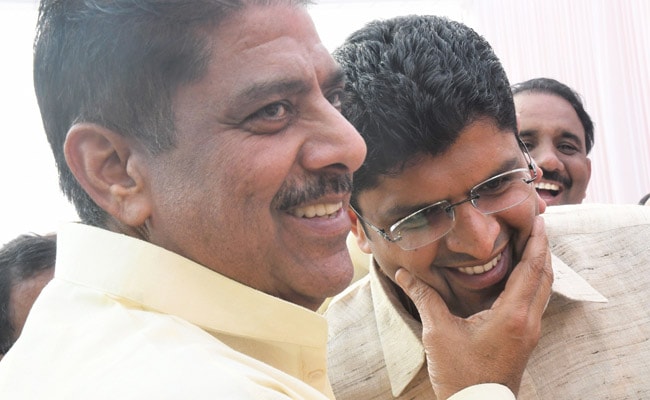 Jailed Haryana politician Ajay Chautala on Sunday attended the oath ceremony of his son Dushyant Chautala who was sworn in as the state's Deputy Chief Minister.

"This is the biggest gift I can ever get being a father. This coalition government will be stable and bring development in the state," Ajay Chautala, who has been granted a two-week leave from jail, told reporters.

Dushyant Chautala's Jannayak Janata Party (JJP) and seven Independent legislators have backed the BJP, helping it form the government after it won 40 seats, six short of the majority mark in Haryana's 90-member assembly, in elections held this week.

The BJP's Manohar Lal Khattar was sworn in as chief minister for the second time at the ceremony in Raj Bhawan on Sunday as the festival of Diwali was celebrated across the country. Governor Satyadeo Narain Arya administered the oath.

Ajay Chautala, who walked out of prison this morning for his two-week break, said the new government will work for the development of Haryana in the next five years.

"Whatever Congress leaders say, it is their wish. This alliance will definitely work and take forward the development works of Haryana in the next five years," when asked about the Congress attacking the JJP for supporting the BJP.

Ajay Chuatala, 57, had been in jail along with his father and former Haryana Chief Minister Om Prakash Chautala since January 2013. Both are serving a 10-year sentence for illegally recruiting 3,206 junior basic teachers 18 years ago. They were accused of tampering with the selection lists and admitting candidates in exchange for kickbacks.

The court had refused pleas for leniency in view of Om Prakash Chautala's age - he was 78 years old at the time.

While in jail, a feud in the Chautala family had intensified. Ajay Chautala's brother Abhay Chautala has accused him and his sons of playing into the hands of the BJP and weakening the party.

After his expulsion, Dushyant Chautala had formed the JJP.

"Dushyant has established the organisation in just 11 months along with the party workers. A son is known by his father's name only. The efforts taken by the party workers have flourished today on an auspicious occasion," Ajay Chautala was quoted as saying by news agency ANI.

"Dushyant does not take any decision before taking my advice and when he met me before forming the alliance, I gave my nod for the same," he added.