Haryana Exit Poll: A poll of exit polls predicted that the BJP will win 66 of Haryana's 90 seats, the Congress will trail with just 14 seats.

The BJP, led by Chief Minister Manohar Lal Khattar will romp to victory once again in Haryana, exit polls indicated on Monday. Seven exit polls have predicted a victory for the party, one of them estimated an upper margin of 80 seats.

A poll of exit polls predicted that the BJP will win 66 of Haryana's 90 seats, the Congress will trail with just 14 seats.

Last time, the BJP won 48 seats, the Congress 17. This time, Mr Khattar had set his party a target of 75 seats.

Health warning: Exit polls do not always get it right. 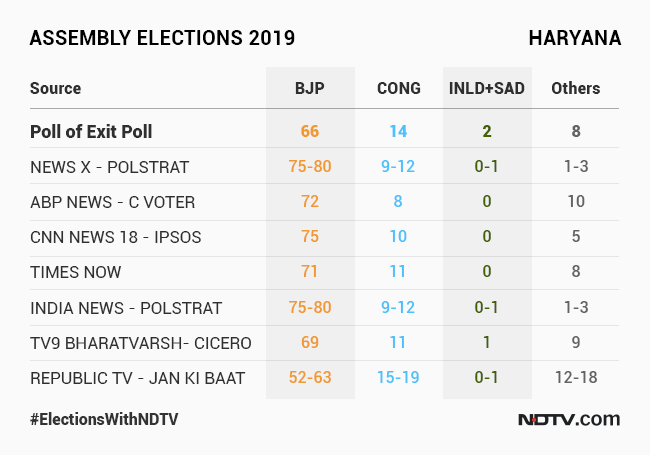 Haryana Poll Of Exit Polls: A poll of exit polls predicted that the BJP will win 66 of Haryana's 90 seats, the Congress will trail with just 14 seats

The Congress campaign in the state has been plagued not just by factionalism but also revolts from local leaders and defections. The party is yet to recover from the rout it faced in the Lok Sabha elections and the subsequent crisis triggered by Rahul Gandhi's exit from the party chief's post.

This time, the Dushyant Chautala-led JJP (Jannayak Janta Party), a breakaway faction of Om Prakash Chautala's Indian National Lok Dal, was hoping to provide a challenge to the BJP. The party was formed after a feud in the Chautala clan in December.

A victory will boost the BJP strategy of focusing on national issues for state polls, especially in states like Haryana, which struggled to provide jobs to its people. The state has the third highest unemployment rate in the country.

In both Maharashtra and Haryana, the party sought votes on the performance of the central government following its sweeping victory in the Lok Sabha elections - especially the scrapping of special status of Jammu and Kashmir and the National Registry of Citizens, which the Centre wants to take across the country.