The agreement between the BJP and JJP was announced after a meeting between the two sides at BJP chief and Union Home Minister Amit Shah's residence on Friday.

Haryana election results: The BJP has sealed an alliance with Dushyant Chautala's party.

Manohar Lal Khattar will take charge as the chief minister of Haryana for second straight time today. Dushyant Chautala, whose Jannayak Janta Party lent support to the BJP after it fell short of majority, will take oath as his deputy at the swearing-in ceremony that will be held at Raj Bhavan in Chandigarh at 2.15 p.m.

Dushyant Chautala's father, Ajay Chautala, who was granted a two-week leave from Tihar Jail where he is serving sentence in a teacher recruitment scam, will be among those in attendance at the ceremony.

"Dushyant has established the organisation in just 11 months along with the party workers. A son is known by his father's name only. The efforts taken by the party workers have flourished today on an auspicious occasion," Ajay Chautala was quoted as saying by news agency ANI.

"Dushyant does not take any decision before taking my advice and when he met me before forming the alliance, I gave my nod for the same," he added.

The BJP, which has 40 seats, has sealed an alliance with Dushyant Chautala's party which won 10 seats in the just-concluded state polls. Seven independent MLAs have also extended support to the BJP, helping it reach a tally of 57 seats in the 90-member house. 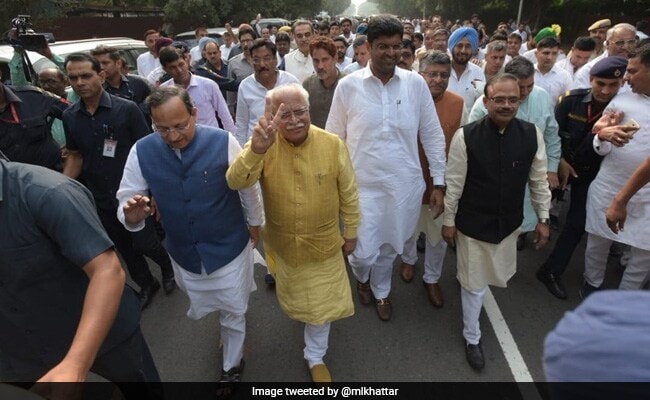 The agreement between the BJP and JJP was announced after a meeting between the two sides at BJP chief and Union Home Minister Amit Shah's residence on Friday. It came after a day of frenzied negotiations at the beginning of which the BJP appeared to lean towards controversial politician Gopal Kanda and the independent MLAs.

Gopal Kanda, who is accused of abetting the suicide in 2012 of an airhostess who worked for his aviation company, had pledged his "unconditional support" to the BJP. Photos of Kanda and another independent MLA on a special plane were in wide circulation online yesterday, prompting criticism from the opposition as well as senior BJP leader Uma Bharti.

Haryana voted on Monday for its 90-member assembly. Defying exit poll predictions of a one-sided sweep by the ruling BJP, counting day in Haryana remained a close contest for hours on Thursday before ending in a hung verdict plonked in the hands of independent MLAs and JJP which came in third place.

The BJP's final tally was seen as a blow for a party that won all 10 parliamentary seats in the national elections earlier this year, and predicted that it will cross 75 seats this time in the assembly. Eight of 10 ministers from the party lost.