Holi 2018: How 'Festival Of Colours' Is Celebrated In Mathura And Vrindavan

Travellers come from overseas to witness the special Holi celebrations in Bank-e-Bihari temple of Vrindavan and Mathura's Lath Maar Holi. 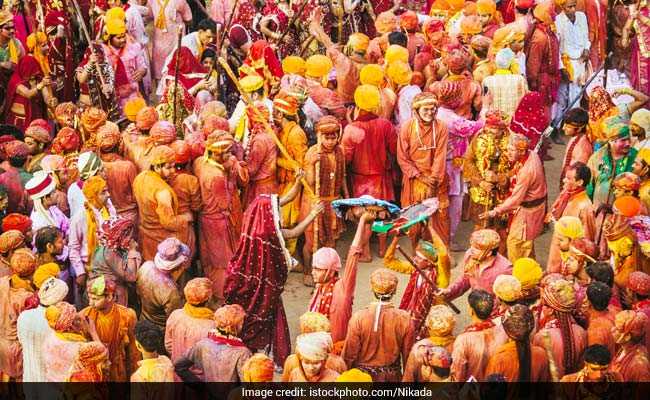 Holi is also celebrated to welcome the arrival of spring season.

New Delhi: Holi, the festival of colours, falls on March 1-2 this year. While the entire country immerses in Holi festivities and colours, the festival has gained huge popularity across the world. Travellers come from overseas to witness the special Holi celebrations in Bank-e-Bihari temple of Vrindavan where a day is also dedicated to phoolon ki holi or Holi played with colours, and Mathura's Lath Maar Holi, a style where women of Barsana in Mathura beat up men from adjacent town Nandgaon with sticks. The two places are photographers' delight. Holi is also celebrated to welcome the arrival of spring season.

Several legends are associated with Holi. One of the famous one is of an evil king called Hiranyakashyap and his son Prahlad. Prahlad was an ardent devotee of Lord Vishnu, but his father did not like that. He wanted him to give up his faith in Lord Vishnu, but when Prahlad refused, he tried to kill his own son. After several attempts, Hiranyakashyap made Prahlad sit on his sister's lap Holika, who had a blessing that she will not be burnt by fire, and set them on fire. Prahalad, with the blessing of Lord Vishnu, remain untouched, but Holika was burnt. With this legend, Holi represents the victory of good over evil and the tradition of Holika Dahan came into practice. On Holika Dahan, holy pyres are burnt on the streets and people from the communities come and pray, signifying the triumph of good over evil.

Another legend associated with Holi is that young Lord Krishna was unhappy with the fact that he had dark complexion while Radha was fair. His mother Yashoda suggested Krishna to go and playfully colour Radha. Krishna went to the neighbouring village of Barsana, the hometown of Radha to colour Radha and other Gopis. In return, the women beat him playfully with sticks. That's how the tradition of Lath Maar Holi began.

Promoted
Listen to the latest songs, only on JioSaavn.com
In Mathura's Barsana and adjacent Nandgaon, the Lath Maar Holi is traditionally celebrated because of the legend associated with it. Women beat men with sticks as they use shield to cover themselves up, all in a playful way. The celebrations took place on February 24 and 25 this year and the Holi procession will take place on March 1.

In Vrindavan, Holi celebrations continue for a week. With chants of hari bhajans, dance, colours, water, flowers and sweets, the festival is celebrated with great joy and is also every photographer's delight. People come from far off to witness the Holi festivities here. The festivities at Bank-e-Bihari temple will take place on March 1.