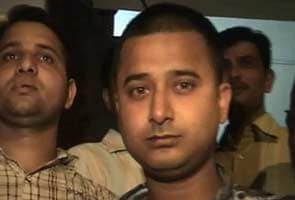 Kalita after his arrest in Varanasi

Varanasi/Guwahati: Amar Jyoti Kalita, the main accused in the Guwahati molestation case, was sent to a five-day transit remand today by a Varanasi Court as sought by the Assam Police. A team of policemen from Guwahati arrived in Varanasi this afternoon to take custody of Kalita, who was filmed as he led a mob of 50 in molesting a young woman in Guwahati. He was the man in a red T-shirt seen smiling on video as he tried to rip the woman's shirt.

Kalita was arrested yesterday in Varanasi; he had been missing since the Guwahati video went viral and there had been various reports about him being spotted in Odisha, Maharashtra and West Bengal. When he was finally arrested in Uttar Pradesh, local police officers said he was vague when answering questions put to him.

Wearing a black and white check shirt, a clean-shaven Kalita has lost his smile in police custody. In the video aired by a news channel in Guwahati on July 9, the camera did not seem to bother Kalita - he smiled as he led a group of men who fell upon the victim, dragging her back when she managed to run a few feet in a futile attempt to flag passing cars for help. Kalita refers to himself as James Bond in his Facebook profile; his photo there shows him wearing the same red shirt that he wore on the night of the mob attack.

Gaurav Jyoti Neog, a reporter from the channel that filmed the molestation in Guwahati, was arrested last week. He is a close friend of Kalita's, according to the police. They also say he incited the mob to attack the victim.

Promoted
Listen to the latest songs, only on JioSaavn.com
The public assault was filmed by another reporter from the channel that Mr Neog worked for at the time. NewsLive says when its reporters realized they could not fight the mob to rescue the girl, they decided that filming the incident would help provide evidence that would nail the accused.

The Assam chief minister said last week that Kalita had been spotted in Mumbai and that the police was tracking him. Earlier yesterday, the Guwahati police said Kalita had been spotted near Kolkata. They said his photo would be flashed on local channels, with offers of a reward for information that could help locate him.
Comments
Guwahati molestation case