Delhi Chalo farmers' protest: The protest has the support of 500 farmers' organisations. Farm union leaders claim some 3 lakh farmers are participating in the protest march. 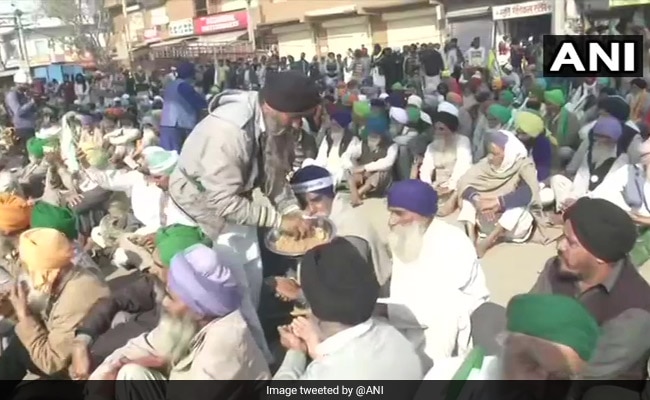 Farmers protesting against the farm laws were seen offering prayers and distributing prasad among each other and security personnel at Delhi border on the occasion of the 551st birth anniversary of Guru Nanak Dev, the founder of Sikhism, today.

To mark the birth anniversary, farmers protesting at the Tikri border and Singhu border were seen offering prayers.

Delhi: Farmers protesting at Tikri border (Delhi-Haryana border) offer prayers and distribute 'prasad' among each other and security personnel on the occasion of #GuruNanakJayantipic.twitter.com/2eWZji4z6g

"Today is a very auspicious day for us. We are fortunate that today is Guru Nanak Dev ji''s birthday. This our ''sanskars'' in Punjab that we celebrate Guruparva with great zeal. We will do the same tonight as well," Manjeet Singh,  Bharatiya Kisan Union (Doaba) president, was quoted as saying by news agency ANI.

He said that the ''jatbandi'' will do ''kirtan'' and then there will be ''Ardas'' on stage and ''Deepmala'' will also be done in the evening in which farmers will light lamps and candles on the tractor and trolleys in all places.

"We have definitely come here from Punjab but we will celebrate Guruparva the same way we do every year. In Ardas, we pray that our Guru Nanak ji gives good sense to the government so that the "black laws" being imposed on us are scrapped," Mr Singh said.

On Sunday, the protesting farmers- who have braved water cannons, tear gas and police barricades in the last few days - rejected the centre's proposal of holding early talks and shifting their protest venue and said that central government should have approached with "an open heart" and not put in preconditions for the talks.

The government's offer was rejected over fears that the protest spots the centre suggested can become jails - a concern that started after the Delhi Police sought permission from the Arvind Kejriwal government to turn stadiums to jails for protesters.

The protesting farmers- who have braved water cannons, tear gas and police barricades in the last few days - have threatened to block the roads to Delhi from five entry points: Sonipat, Rohtak, Jaipur, Ghaziabad-Hapur, and Mathura.

"We agree that this is causing trouble to common public. But government is responsible for this. If we end this, all of us will have to struggle in longer run," a farmer told NDTV.

The protest has the support of 500 farmers' organisations. Farm union leaders claim some 3 lakh farmers are participating in the protest march.

Guru Nanak Jayanti, also known as Guru Nanak Gurpurab is celebrated on the full moon day of the Kartik month as per the Hindu calendar. It is also marked as Kartik Poornima.