Under the new rules, penal provisions have been made more stringent for common traffic violations.

Dinesh Madan was not wearing a helmet, and the pollution certificate was also missing.

A scooter rider has been fined Rs 23,000 in Gurgaon for not carrying his vehicle's registration documents and his driving licence, days after the amended Motor Vehicle law came into effect. The man, Dinesh Madan, was not wearing a helmet and the pollution certificate was also missing. He later said that the value of his scooter was Rs 15,000, adding that he would carry his documents in the future.

"I wasn't wearing a helmet and didn't have the registration certificate (RC). The traffic police asked me to give him my scooter's key but I refused. He immediately printed a challan of Rs 23,000 and seized my vehicle," Mr Madan was quoted by news agency ANI as saying.

"The value of my scooter is around 15,000. I even got a copy of the registration on WhatsApp from my home but by then the police officer had printed the fine.The amount could have been less if he had waited for a while. I want that the fine should be relaxed. From now, on I will always carry my documents," he added. 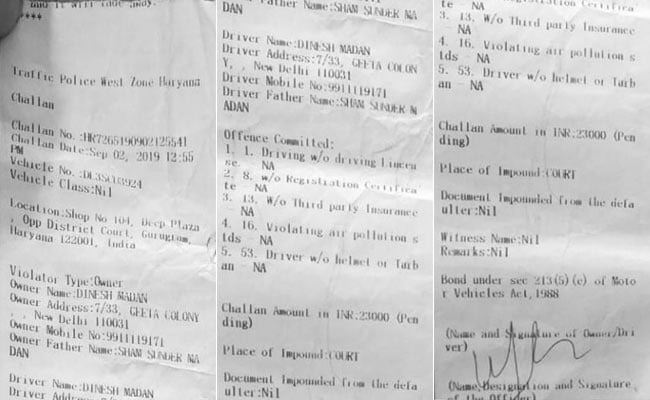 Under the new rules, penal provisions have been made more stringent for common traffic violations.

Speeding can now invite a penalty of Rs 1,000- Rs. 2,000. For driving without insurance, there will be a fine of Rs. 2,000; those driving without helmets will have to shell out Rs 1,000 and can face three-month suspension of their licence.

For drunk driving, the fine has been hiked from Rs. 2,000 to Rs. 10,000. Drivers will be fined Rs 10,000 for not giving way to emergency vehicles like ambulance and fire brigade.

The law came into effect on September 1. On the first day, the Delhi Police issued 3,900 challans.