Gujarat Election 2017 Highlights: My Government Is For Poor, Says PM Modi In Vadodara 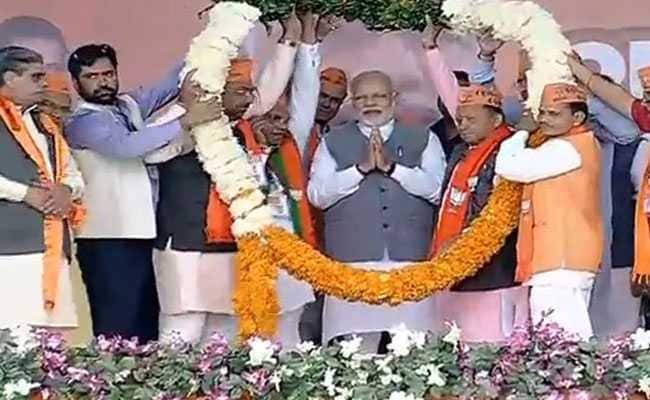 In the first phase, 89 of the state's 182 assembly constituencies in Kutch, Saurashtra and South Gujarat underwent polling and witnessed about 68 per cent turnout. The Election Commission responded, after there were several allegations of EVM malfunctioning, saying that about 0.5 per cent of the total ballot units and control units - which make up the EVM - had to be replaced during voting.

The second phase of Gujarat assembly election is scheduled for December 14 and the results will be announced on December 18.

Here are the highlights of PM Modi's Gujarat election rallies.

Dec 10, 2017 21:30 (IST)
When we build state of the art bus stations in our cities, construct toilets at a rapid pace, provide gas connections to women, who gains? It is the poor, says PM Modi.

When we build state of the art bus stations in our cities, construct toilets at a rapid pace, provide gas connections to women, who gains? It is the poor. pic.twitter.com/BhKE61ve7f

"When the government of India is building toilets, we are not building them for the rich. We are doing this for the poor," says PM Modi. He adds, "I will never allow anything wrong to happen in this nation. It is important to safeguard the rights of the poor and middle class."
Dec 10, 2017 20:39 (IST)
"We give gas connections...are Ambanis, Adanis and Tatas the beneficiaries? No, the poor are. Congress should stop their lies and focus on development issues," says PM Modi in Vadodara.
Dec 10, 2017 20:38 (IST)
My Government is for the poor. I can't understand the lies Congress keeps saying. When we build a state of the art bus terminus in Vadodara, do we do it because Mukesh Ambani, Tata or Birla use it? No we make this to serve the poor. Our lives are devoted to serving the poor: PM Modi
Dec 10, 2017 20:29 (IST)
During demonetisation the nation stood with me. They embraced short term pain for long term gain. Congress leaders got worried because everything that they accumulated has gone: PM Modi
Dec 10, 2017 20:22 (IST)
When our soldiers were fighting in Doklam, Congress leaders were meeting the Chinese Ambassador. When asked why, he said - to get a sense of what is happening in Doklam. Now, you tell me - in such times should we trust our authorities more or the Chinese: PM Modi
Dec 10, 2017 20:04 (IST)
Wasn't police there during Congress regimes too? Then why was Gujarat's law and order so bad. BJP has given importance to Shanti, Ekta and Sadbhavana: PM Modi
Dec 10, 2017 19:59 (IST)
These elections are about the Vikas agenda of BJP versus the destructive politics of the Congress: PM Modi in Vadodara
Dec 10, 2017 19:55 (IST)

PM Narendra Modi is now addressing a rally in Vadodara. He says Vadodara is special. The way the city supported him in 2014 is something he can never forget.
Dec 10, 2017 17:13 (IST)
Taking a swipe at the Gandhi family, PM Modi said that the sole mission of some people in Delhi is "parivar bachao".
"These are the same people who, in an hour of voting yesterday, started saying EVMs are hacked thanks to Blue Tooths! Some logic this is" he added.
Dec 10, 2017 17:11 (IST)
"When I first stated my intent to ensure electrification of villages in Gujarat, the state Congress leaders mocked me. They said it can never happen, they also asked me- you have not headed a Panchayat how can you promise this. We proved them wrong, ensured villages get power" the Prime Minister said.
Dec 10, 2017 17:10 (IST)
"With the Mantra of Shanti, Ekta and Sadbhavana, BJP Governments have taken Gujarat to new heights of progress. A society that is united and harmonious can progress well" he said
Dec 10, 2017 17:03 (IST)
PM Narendra Modi addressed his third rally of the day at Kalol. Saying that the BJP is fighting the Gujarat elections on the issue of development, he accused the Congress party of being "back to their old tricks."
"A generational shift has not brought in a new political culture for the party. They rely on their same divide and rule politics." he added.
Dec 10, 2017 14:12 (IST)
PM Modi is addressing a rally in Sanand now.

Happening now: PM @narendramodi is speaking at a public meeting at Sanand. https://t.co/ccj7GJ3sjW

Dec 10, 2017 12:48 (IST)
With the coming of the DMIC, Banaskantha will become a transport hub. This will provide opportunities to the youth of this region: PM Modi
Dec 10, 2017 12:44 (IST)
After Mani Shankar Aiyar was suspended from Congress over calling PM Narendra Modi "neech", PM Modi renewed his attack against Mr Aiyar. "The same Mani Shankar Aiyar, who insulted Gujarat, held secret meetings with Pakistan High Commissioner. What was the reason? Why are people who previously held high posts in military-intelligence establishment of Pakistan writing that we should help make Ahmed Patel the Chief Minister ?" he asked.
Dec 10, 2017 12:41 (IST)
The entire nation is seeing the wonders of Banaskantha in agriculture, particularly in potato cultivation: PM Modi
Dec 10, 2017 12:35 (IST)
PM Modi is speaking live at rally in Palanpur.

Dec 10, 2017 11:13 (IST)
Prime Minister Narendra Modi has called the Gujarat Election a fight between "Vikas" (development) and "Vanshwad" (dynastic politics). During his rallies, he has labelled Congress as being "anti-poor" and "anti-Gujarat".Meanwhile, Rahul Gandhi  has also been holding an aggressive campaign in the state. He also ran a "question a day" campaign on Twitter where he asked the BJP and PM Modi about unfulfilled promises in Gujarat.
Dec 10, 2017 10:59 (IST)
Both BJP and Congress have been making sharp remarks against each other. The high-voltage campaign turned ugly on Thursday when now-suspended Congress leader Mani Shankar Aiyar called PM Narendra Modi "neech" in a political remark. The BJP, which has been ruling in Gujarat and at the centre, latched on to the comment and demanded apology after which Congress Vice President Rahul Gandhi suspended the senior leader.
Dec 10, 2017 10:21 (IST)
Congress Vice President Rahul Gandhi is also set to address several election rallies today in Kheda's Dakor, Aravali district's Aravali and Shamlaji, and Banaskantha district's Deodha. He will also speak at a public meeting in Gandhinagar's Kalol where PM Narendra Modi will also  address an election rally.
Dec 10, 2017 10:14 (IST)
As Gujarat observed the first phase of assembly elections, both BJP and Congress expressed confidence over winning the crucial elections. "I am seeing that BJP is headed towards a historic victory," Prime Minister Narendra Modi said in tweet on Saturday . Congress Vice President Rahul Gandhi tweeted in Gujarati to say the Congress would bring change to the state.
Dec 10, 2017 10:06 (IST)
Preparations are underway for PM Modi's election rally in Banaskantha district's Palanpur, ANI reported.