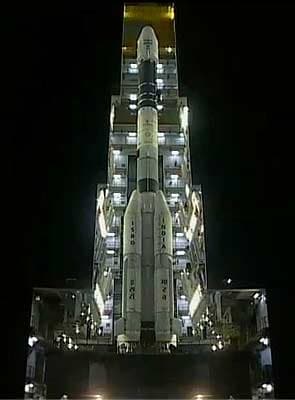 The GSLV-D5 is scheduled for launch at 4.50 pm today

The countdown began on Sunday at 11.50 am at Sriharikota rocket port in Andhra Pradesh, for the launch scheduled at 4.50 pm today.

It was halted one hour and 14minutes ahead of lift-off, after some 'leakage' was detected. Officials say they are not sure when the countdown can be resumed.

The rocket port is located about 80 km from Chennai.

"The rocket cost is around Rs 160 crore and the cost of the satellite is around Rs 45 crore," an official of the Indian Space Research Organisation (ISRO) told IANS, preferring anonymity.

The key significance of this Rs 205 crore launch is that the rocket's cryogenic engine is indigenously developed by ISRO.

This was the first mission of GSLV in the last three years, after two such rockets failed in 2010. One of the GSLV rockets flew with an Indian cryogenic engine, and the other one with a Russian engine.

The GSLV is a three stage/engine rocket. The first stage is fired with solid fuel, the second with liquid fuel and the third is the cryogenic engine.

The successful flight of this rocket is crucial for India as it will be the first step towards building rockets that can carry heavier payloads of up to four tonnes.

An ISRO official, preferring anonymity, told IANS that several design changes had been incorporated in Monday's rocket after studying the past GSLV rockets and the issues faced in them.

Design changes were made in the lower shroud/cover that protects the cryogenic engine during the atmospheric flight, wire tunnel of the cryogenic stage to withstand larger forces during the flight, and the revised aerodynamic characterisation of the entire rocket.

ISRO said indigenisation of many critical systems including liquid hydrogen propellant acquisition system (to prevent possibility of outside contamination) was achieved.

ISRO officials told IANS that though the rocket's rated carrying capacity is around 2.2 tonnes, it was decided to carry a sub-two tonne satellite with minimum number of transponders (receivers and transmitters of communication signals), to be on the safe side.

Meanwhile, it is going to be tense 17 minutes for the ISRO scientists on Monday after the 49.13 metre tall rocket weighing 414.75 tonnes blasts off at 4.50 pm, till the GSLV rocket safely delivers GSAT-14 to augment the Indian transponder capacity.

During the countdown to the rocket launch, fuelling of the three stage/engine GSLV rocket's four strap-on motors and the second stage with liquid fuel will be completed by August 19 morning, while the first-stage core engine is powered by solid fuel.

Promoted
Listen to the latest songs, only on JioSaavn.com
The process of fuelling the cryogenic engine will begin around 10 hours prior to the launch.