Rs 75,000 crore have been allocated for the Pradhan Mantri Kisan Samman Nidhi scheme.

The government said it will give small farmers Rs 6,000 in three equal installments

The Bahraich district, just 130 kilometres from Uttar Pradesh's capital Lucknow, but among India's poorest and most backward district as per Niti Aayog data, is where some of the beneficiaries of the huge Rs 75,000 crore government plan to top up farmer incomes stay. So just how far will Rs 6,000 take them?

45-year-old Ram Sevak and 50-year-old Shiv Kali are poor and marginal farmers in Bahraich, and say they earn about Rs 7,000 a month from their fields. That's just about Rs 233 a day and it is barely enough. The couple's eldest son works at a factory near Mumbai and sends home an additional Rs 3,000-4,000 a month - that marks up the daily income to a maximum of Rs 366 a day. Most of this money goes into getting basic needs for running a house with eight members - more than 50 per cent on food, and then on gas and other daily needs.

The couple say they welcome the Modi government's plan to give farmers like them Rs 6,000 a year, even though that is just about Rs 17 a day. "I guess I won't have to take loans to run the house. That seems like an advantage of this money," says Shiv Kali.

In Bahraich's Nageshwar Purva village, farmers Phoolchand Yadav and Rajesh Kumar Yadav jointly own about four acres of land. They plant paddy or wheat in a two crop per year cycle, or sugarcane as a single crop. The farmers say they made about Rs 10,000 a month last year from their fields or about Rs 330 a day. That income is being used to try to run a household of 15 people - food on the plate being the topmost priority. These farmers hope that the extra money from the government - that is to be paid in three installments of Rs 2,000 each - can help to at least offset the cost of fertiliser for their fields.

In one crop cycle, Phoolchand Yadav and Rajesh Kumar Yadav say they need at least two bags of DAP or phosporous fertiliser per acre, and another two bags of urea per acre. A 45 kg bag of DAP costs about Rs 1,200, while a similar bag of urea costs Rs 330, marking up the total fertiliser costs for the farmers per acre per crop cycle to Rs 3,060. "Suppose I have a bigha of sugarcane... if my expenditure is Rs 6,000 and that's all I get from my crop, you tell me what is my profit? We are doing what we can at our end anyway," says Phoolchand Yadav. 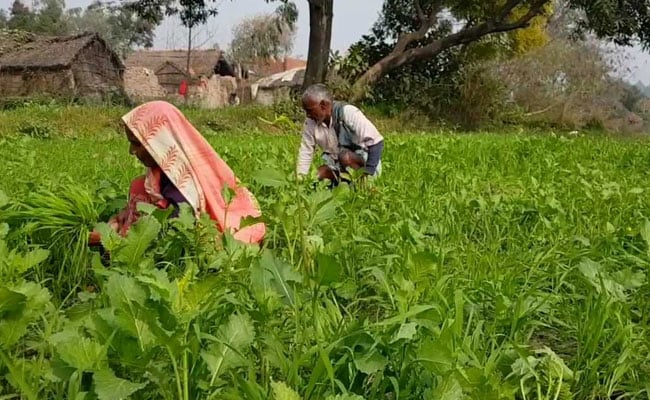 The government's announcement for farmers was timed to have an impact on the upcoming 2019 general election, but 55-year-old farmer Mohd Raza isn't impressed. Mr Raza and his family of four hold just about 0.25 acres of land in a Bahraich village and the farmer also works on fields owned by others for cash. Mr Raza says his monthly income from farming and other work is Rs 5,000 a month or Rs 166 a day - barely enough for a family of four. For his sugarcane crop this season, he spent a total of Rs 6,000 as input costs - "Rs 1,750 on seeds, Rs 3,000 for DAP and urea and Rs 1,250 for water and diesel."

But the farmer says he got only Rs 4,900 for his crop - a loss of Rs 1,100. The government payout can help tide over the loss, but Mr Raza is angry. "I don't want money... I just want a fair price for my produce... I have a small piece of land and the last crop I produced was 12 quintals of sugarcane. I spent Rs 6,000 on the crop but I got only Rs 4,900 for it. How will I make up for this loss? If Modi ji had given me Rs 6,000 per month from the day he came to power then I wouldn't have so many problems. They are thinking of us now because elections are coming up and Modi ji needs the votes of farmers," says the farmer.

In a way, the prime minister's Kisan Yojana seems to be a variant of other schemes that other state governments are already implementing. For instance, the Telangana government provides direct income support to farmers on a per acre basis and also this is given to all farmers and there is no ceiling on land ownership. The government says its PM-Kisan or the Pradhan Mantri Kisan Samman Nidhi will benefit 12 crore small and marginal farmer families.