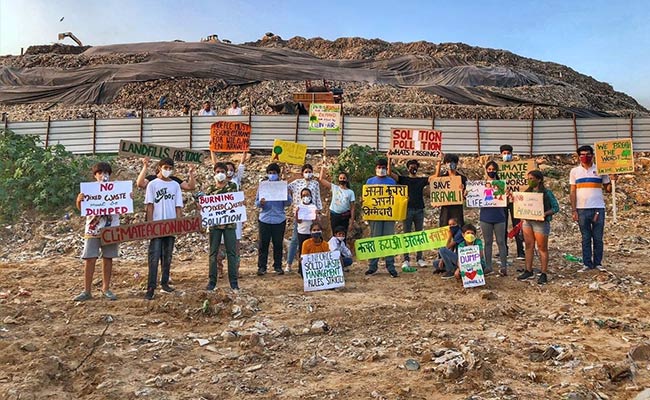 The bench noted 33 lakh metric tonnes (MT) of waste was lying at the landfill site. (FILE)

A bench headed by chairperson Justice Adarsh Kumar Goel said there was no meaningful progress in clearing the legacy waste at the Bandhwari landfill site in Gurugram and the situation, despite being an environmental emergency, was not handled with the seriousness required.

The bench, also comprising Justice Sudhir Agarwal and expert members A Senthil Vel and Afroz Ahmad, said the tribunal had to determine the liability for past failures as per the "polluter pays principle", besides directing remedial action in a time bound manner for the protection of the environment and public health.

“While problems of space availability etc have been put forward, we do not find problems to be insurmountable if there is will and high priority,” the bench said adding, “It is not an individual which is handling the situation but the state authorities having adequate powers and resources.” The NGT said the progress report submitted by state authorities showed a substantial part of legacy waste still remained un-remediated.

The bench noted while 33 lakh metric tonnes (MT) of waste was lying at the landfill site, the remediation capacity was only 5,100 metric tons per day (TPD).

It was established that serious environmental damage continued due to failure in the disposal of waste and no effective action was taken in the matter by the authorities concerned, the green panel said.

“Having regard to the quantum of un-remediated legacy waste, we direct the Chief Secretary, Haryana to deposit a sum of Rs 100 crores towards environmental compensation for continuing damage to the environment and public health with the Haryana State Pollution Control Board (PCB) in a ring-fenced account within one month,” the bench said.

Constituting a nine-member committee, the bench said the Bandhwari site along with 10 acres of land cleared separately can be used for setting up waste processing facilities to handle the waste generated by the local bodies.

An action taken report about the status of compliance as on December 31, 2022 could be provided to the tribunal by January 15, 2023, the bench said.

The green panel was hearing a matter pertaining to the maintenance of environmental norms for handling and disposing legacy municipal solid waste at the Bandhwari dump site.

"By Getting Popularity...": Vijay Deverakonda After 12-Hour Questioning