In her post, Priyanka Gandhi Vadra shared a 45-second clip that showed a logo of Adani Wilmar Limited on a train. 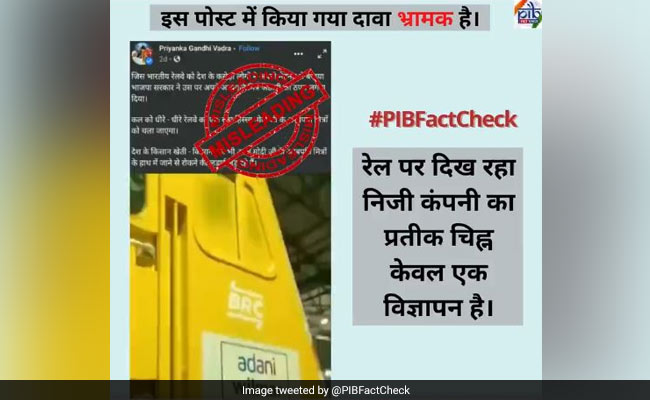 "It has been claimed in a Facebook video that Indian Railways has accepted a private firm's stamp. This claim is misleading," the Press Information Bureau said in a tweet.

"This is just an advertisement that aims to improve revenue," the PIB said in a "Fact Check" alert.

In her post, Priyanka Gandhi Vadra shared a 45-second clip that showed a logo of Adani Wilmar Limited, an FMCG firm, on a train. "The Railways that was created with the hard work of crores of Indians... the BJP has put a stamp of its billionaire friend Adani. In the days to come, a large part of the Railways will go to the billionaire friends of Modi ji," she wrote in a post in Hindi, targeting Prime Minister Narendra Modi and the ruling BJP.

"India's farmers are waging a tough battle as they try to stop Modi ji's billionaire friends from taking over the farm sector," the 48-year-old Congress leader further wrote on Facebook, commenting on the farmers' protests near Delhi borders that began late November.

However, on Twitter, she shared a post by Gujarat Congress leader Hardik Patel that had the same clip with him commenting on an "advertisement" on the train. "Adani group's flour advertisement is clearly being endorsed by Indian Railways. Now, it can be said, without a shadow of doubt, that the farmers' fight is on the path of truth," he wrote in his tweet.

Thousands of farmers are camping near Delhi's borders for the last three weeks against the controversial farm laws, which they say will leave them at the mercy of corporates.