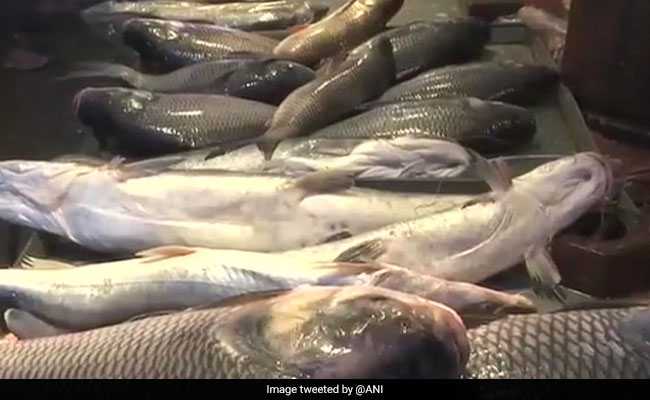 The Goa government banned import of fish over scare of formalin being found in it. (Representational)

The monsoon session of the Goa Assembly began on a stormy note today with the opposition demanding a discussion on the issue of formalin being found in fish in the state, instead of the listed business.

As soon as the House assembled on the opening day, Leader of Opposition Chandrakant Kavlekar demanded that they be allowed to move an adjournment motion to take up the issue of presence of formalin in fish, as confirmed by the state Food and Drugs Administration (FDA) earlier.

The Speaker did not allow it and instead, asked the Congress members to raise the issue through a Calling Attention motion. However, Mr Kavlekar refused to listen and along with other Congress members rushed into the well of the House.

The Speaker then adjourned the House till 12 noon.

When the House assembled again, the opposition member continued with their demand for an adjournment motion As Chief Minister Manohar Parrikar tried respond to a question tabled in the House, the Congress legislators again demanded that their adjournment motion be considered on priority basis by suspending the Question Hour. The Speaker said he would take up the issue after the Question Hour, but the din continued.

The Speaker passed obituary references amidst noisy scenes and adjourned the House till 2.30 pm. The Goa government had yesterday banned the import of fish from outside the state till the end of this month, in view of the scare of formalin being found in it.

Mr Parrikar had said that instructions would be issued a Goa's borders not to allow fish-laden trucks from outside the state. The Goa FDA had earlier confirmed the presence of the organic compound in fish imported from other states.

However, the agency had later said the toxic chemical used to preserve bodies and prevent its decay in mortuaries was "on par" with its naturally-occurring levels in the sampled fishes and there was no added amount of it.

The chief minister had said the ban would eliminate all fears of the presence of formalin content in fish.