Election 2019: Indian cricketer Harbhajan Singh spoke out in defence of fellow cricketer and BJP Delhi East candidate Gautam Gambhir, who was caught in a war of words with AAP rival Atishi 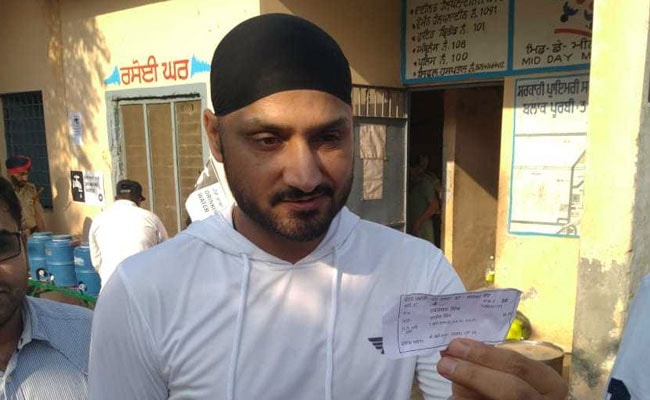 Lok Sabha Election: Harbhajan Singh was spotted at a polling booth in Jalandhar in Punjab

Cricketer Harbhajan Singh was among those who cast their votes early today morning at Garhi village in Jalandhar in Punjab during the seventh and final phase of the 2019 Lok Sabha election. Seen standing in line at the polling booth, he appealed to voters not to miss "an opportunity" to exercise their franchise.

"There are too many seasoned people in the politics. So I have no plan," he told news agency IANS.

There were reports the BJP had contacted the 38-year-old off-spinner over fielding him from the Amritsar Lok Sabha constituency in the state.

The Jalandhar constituency features a three-way fight between Shiromani Akali Dal leader Charanjit Singh Atwal, Santokh Singh Chaudhary of the Congress (who is the sitting lawmaker) and Jora Singh of the Aam Aadmi Party (AAP).

The seat is a Congress stronghold, having voted for them in each of the past three general elections.

Earlier this month Harbhajan Singh spoke out in defense of fellow cricketer Gautam Gambhir, who is the BJP candidate from the Delhi East seat. Mr Gambhir, who joined politics in March, had been involved in a heated war of words with AAP rival Atishi.

The AAP leader had accused Mr Gambhir of having two voter ID cards and accused him of circulating derogatory pamphlets with obscene remarks about her.

Voters across 59 Lok Sabha constituencies in Punjab, Uttar Pradesh, West Bengal, Bihar, Madhya Pradesh, Himachal Pradesh, Jharkhand and Chandigarh will decide the fate of as many as 918 candidates in the final phase of the elections.

The BJP has the most at stake in this phase, having won 30 of these seats in the 2014 polls.