Muted Ganpati Visarjan In Mumbai And Pune Amid COVID-19

Ganesh Visarjan: The immersion of Ganesha idols was a low-key affair in the wake of the COVID-19 pandemic. More than 35,000 police personnel were deployed across Mumbai for smooth immersion of idols. 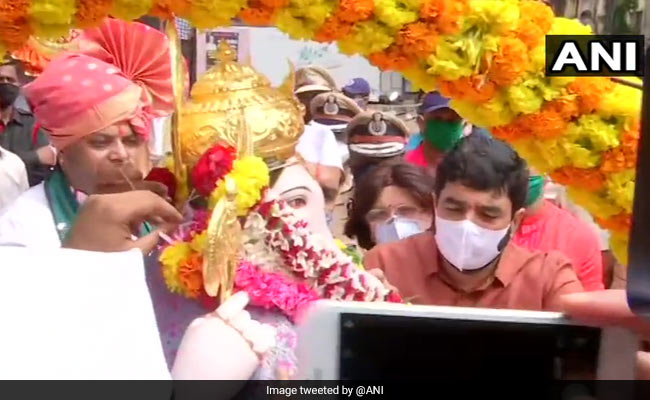 Ganesh Visarjan 2020: Bidding farewell to Lord Ganesha at the end of the 10-day festival

Devotees in Mumbai and Pune bid farewell to Lord Ganesha today as the curtains came down on the ten-day of Ganesh Chaturthi festival. The visarjan or immersion, which in previous years used to be an elaborate affair, was low-key in the wake of the COVID-19 pandemic. More than 35,000 police personnel were deployed across Mumbai and the city's civic body had also made arrangements for smooth immersion of idols.

Till Tuesday noon, a total of 492 Ganesh idols, including 16 from public pandals and 476 from homes of devotees were immersed at various visarjanpoints. In a bid to avoid crowding, the police had appealed to people not perform aarti at the visarjan spots. Instead, they were asked to do the ritual at home before stepping out. Mandals or groups that organise Ganesh Chaturthi were told to strictly follow the COVID-19 norms.

In Pune, devotees carried out immersion of the five 'Manache Ganpati' without much fanfare. The immersions took place in artificial water tanks at the respective pandals. As per tradition, the Ganesh idol of Kasba Ganesh Mandal, the first 'Manache Ganpati', was placed in a palanquin and carried to the decorated water tank amid chants of Ganpati Bappa Moraya.

"Immersion of all five revered Ganpatis was carried out at the pandals by 2 pm," Joint Commissioner of Police, Ravindra Shisave told news agency Press Trust of India. The Mayor of Pune, Murlidhar Mohol took part in immersions at all five pandals.

"Keeping aside all traditions, this year, we performed the immersion in our pandal," said Shrikant Shete, one of the office-bearers of the mandal. Devotees in masks bade farewell to Ganpati of Tambdi Jogeshwari, which was also immersed in an artificial tank. The visarjan of 'Manache Ganapati' idols at Guruji Talim, Tulsibaug and Kesari Wada were done in a similar manner.