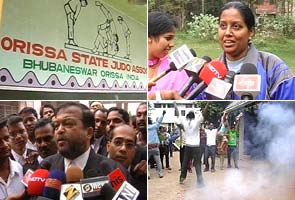 A court in Bhubaneshwar found Acharya and an associate of his guilty today - they will be sentenced on Friday.

In April 2008, Das was shot dead in Bhubaneshwar at his judo training centre by two unidentified men with guns, who raced away on two-wheelers.

Acharya, who is wanted in several cases of extortion, murder and kidnapping, surrendered to the police in Goa in May. He killed Biranchi Das allegedly because he suspected Das was offering protection to a model who refused to respond to his one-sided love.

"I am happy that the court found them guilty. However, I am waiting to see what sentence the court is going to give them," Das' widow Gitanjali said.

Promoted
Listen to the latest songs, only on JioSaavn.com
After hearing the judgment, hundreds of students and fans gathered near Das judo centre and lit incense sticks.

Das was Budhia's mentor but in 2007, he was arrested after the child accused him of torture and abuse. Das was found not guilty and was released a week later. He believed that Budhia's family disapproved of his close relationship with the child runner.