Ganesh Idols Inspired By Chandrayaan 2 Come Up In Mumbai, Hyderabad

While in Mumbaia pandal has been built on the theme of India's moon mission, Hyderabad's pandal saw Lord Ganesh's idol placed in a 23-foot miniature of the satellite. 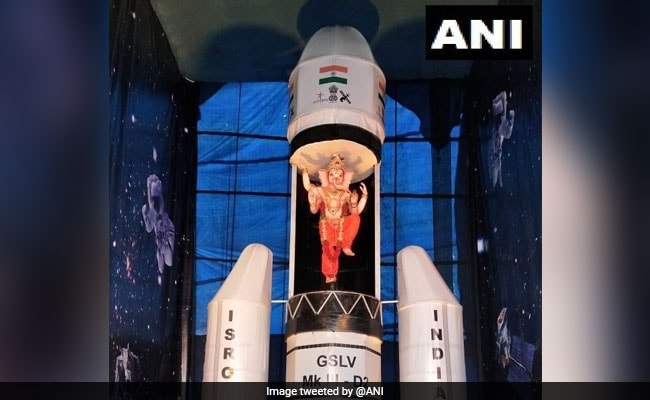 The Chandrayaan 2 moon mission had gripped the nation as it waited with bated breath for the historic moment. With the moon mission coinciding with Ganesh Chaturthi, idols of the God themed on Chandrayaan 2 had been made in Mumbai and Hyderabad.

While in Mumbai a pandal has been built on the theme of India's moon mission, Hyderabad's pandal saw Lord Ganesh's idol placed in a 23-foot miniature of the satellite.

"From the last 10 years we are making different Ganesh idols and this year we have come up with the idea of Chandrayaan-2. This lunar mission vehicle of India was made at a very low budget of 960 Crores when compared to any other satellites made by NASA or other organisations across the world. It is a very big achievement of government of India," Srinivas, member of the Future Foundation Society, which erected the pandal, told news agency ANI.

"This structure is totally made of iron which can be recycled and we can save water bodies from getting affected and polluted. We made a prototype of the satellite which is 23.5 feet tall. The Ganesh idol is about 5 feet tall. The structure weighs about 650 kilograms. We congratulate the team ISRO and the woman staff who made genuine efforts for making Chandrayaan-2 successful," Deepa, another member of Future Foundation Society said.

In Mumbai, Lord Ganesh's idol is placed amid a model of ISRO's Sriharikota launch station and posters with information on India's moon mission.

Maharashtra: #Chandrayaan2 theme Lord Ganpati 'pandal' has been set up in Mumbai. #GaneshChaturthipic.twitter.com/c4en64RkRa

Communication with the Chandrayaan 2 lander was lost seconds before it was supposed to touch down on the moon's surface, chief of Indian Space Research Organisation (ISRO) said on Saturday.