"Gandhiji Not An Immobile Statue": Rahul Gandhi In Tribute To Mahatma

Gandhi Jayanti 2018: "Truth and non-violence, which he lived for and was killed for are the foundation of our country," Rahul Gandhi tweeted. 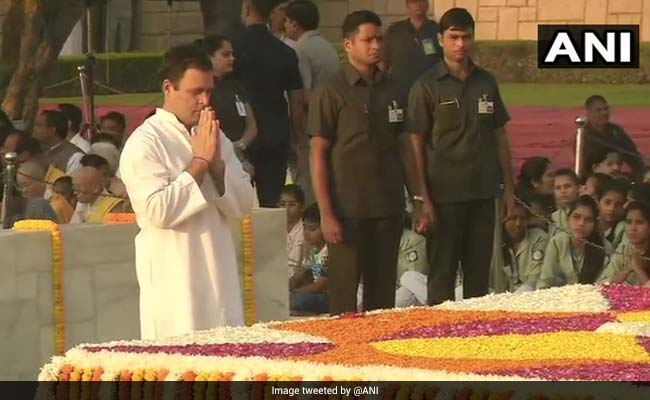 Rahul Gandhi used his tweet this morning on Mahatma Gandhi's 149th birth anniversary to deliver a message for "truth, non-violence" and how "true patriots" must protect the ideals.

The Congress president posted the message along with an image of Mahatma Gandhi juxtaposed with photos of renowned freedom fighters and eminent leaders of India.

Gandhiji is not an immobile statue, he is a living set of ideas and values flowing through India.

Truth and non-violence, which he lived for and was killed for are the foundation of our country.

True patriots must protect them. #GandhiJayanti#Gandhi150pic.twitter.com/ltgTBgBhYF

Both Rahul Gandhi and Sonia Gandhi left immediately as they were to travel to Wardha in Maharashtra for a meeting of the Congress Working Committee (CWC), the party's top decision-making body.

The Congress also put out a series of tweets, including one with the message that a "few dirty drops do not make an ocean dirty".

Gandhi Ji embodies the kind of change that is possible when ordinary people come together to do extraordinary things. #Gandhi150pic.twitter.com/tpZDRmRtl8

"We have learnt a great deal from Mahatma Gandhi, but of all the lessons truth & non-violence stand apart," the party said, posting Mahatma Gandhi's famous quotes.