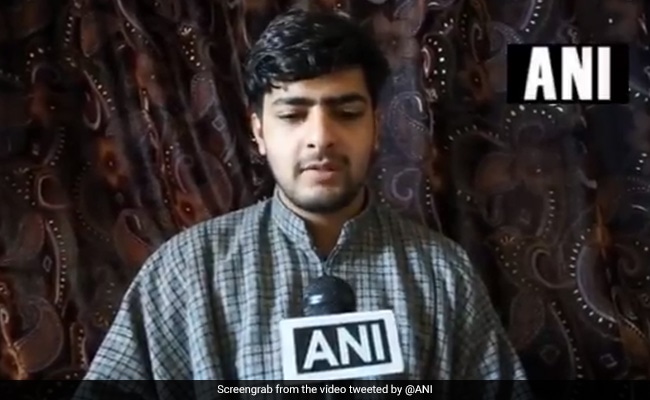 Galib Guru said that he has an Aadhar Card; now he needs a passport to study abroad

Parliament attack convict Afzal Guru's son, who passed his Class 12 examination with distinction, today, said that he wants a passport as he is keen to go abroad for studies. Afzal Guru was hung in 2013 for his role in the 2001 Parliament attack, when his son, Galib Guru was only two years old.

Galib Guru appealed for a passport saying that many colleges abroad are ready to grant him scholarship and he should be getting one as he also has an Aadhar Card. The teenager is keen to study medicine.

#WATCH Afzal Guru's (who was executed in 2013 for his role in 2001 Parliament attack) son Ghalib Guru says, "I appeal that I should get a passport. I also have an Aadhaar card. If I get a passport, I can avail international medical scholarship." pic.twitter.com/jJZSVht8k8

Galib Guru secured 88 per cent marks in Jammu and Kashmir Board of School Education. He had scored 95 per cent in the Class 10 examination, with 'A1' grade, in all five subjects.

Congratulatory messages poured in for Galib Guru on social media after his superb academic performance.

Many on social media questioned why he should be known as "someone's son...he must be treated as a citizen of the country just like others", while others said it's "heartwarming to see him living a mainstream life..."

People's Democratic Party chief, Mehbooba Mufti took to social media and said, "Why should a child be victimised to pay a heavy price for his father's actions... his son is a brilliant student and has every right to live a normal life..."

"A big shout-out to Ghalib Afzal Guru on clearing his 12th class exams with flying colours - 441 marks. Ghalib has definitely proven 'when the going gets tough, the tough get going'. All the best for the future endeavours! Rise and shine!" Sarah Hayat, spokesperson of the National Conference had said on Twitter.